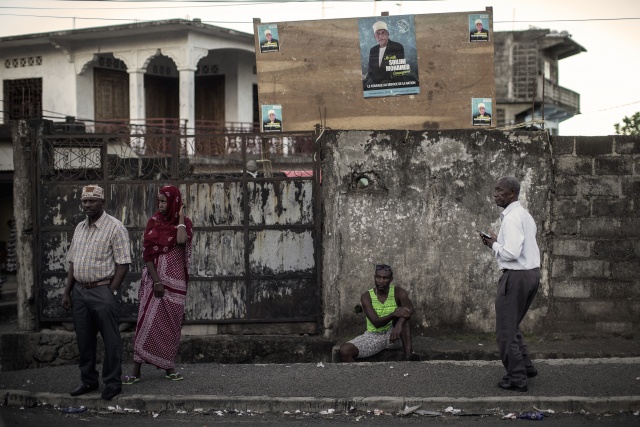 Supporters of Comoros' Presidential candidate Sohili Mohamed "Campagnard" gather at a campaign rally on March 20, 2019 in the village of Domoni, Comoros. Nineteen candidates have registered for the March 24 election and of those given the go ahead, only Azali is backed by a party. The others are contesting as independents. An arrangement to rotate power among the three islands in the archipelago nation helped quell years of discontent and coups in the late 1990s. The election will take place under the provisions of the constitution modified at Azali's initiative in a contested referendum held in July 2018. The reform enables the president to hold two five-year mandates instead of one. If Azali wins, he will be considered as starting a first term, which would allow him to vie for a second in 2024. (GIANLUIGI GUERCIA / AFP)

(AFP) - The president of the tiny archipelago of Comoros, Azali Assoumani, looks set to win a new term Sunday in an election that rivals say has been hijacked.

Huge campaign pictures of Azali, 60, emblazon the whitewashed walls of the capital Moroni and along roads on the three islands of Grande Comore, Anjouan and Moheli.

Those of his rivals are minute -- a comparison that seems to speak eloquently for their chances.

The Supreme Court has barred the bid of some of Azali's major rivals, including former president Ahmed Abdallah Sambi, accused of corruption.

In a pre-election visit to Anjouan, Azali oozed confidence of victory. He burst out laughing when asked about defeat. "That's a question I won't answer. When you set out to do something, you do it to win!"

The mainly-Muslim Indian Ocean archipelago of some 800,000 people is one of the world's poorest and most coup-prone states.

It has suffered more than 20 successful or attempted power grabs since gaining independence from France in 1975. Its first leader, Ahmed Abdallah, lasted barely a month before being ousted.

Azali is staging the poll after Comorans voted in a referendum to support the extension of presidential mandates from one five-year term to two, rotating among the three islands.

The controversial change shocked a fragile balance of power established in 2001 that sought to end separatist crises on Anjouan and Moheli and halt the endless cycle of coups.

The opposition fears that Azali, a native of Grande Comore last elected in 2016, could hold power for 10 more years until 2029.

The referendum last July led to violent protests on Anjouan, which would have taken over the presidency in 2021.

The head of the Union of the Opposition group, former deputy president Mohamed Ali Soilihi, is one of the candidates who has been barred from running.

"This election is a great masquerade. The plot has been written out in advance. On the evening of March 24, there'll be an announcement of victory (for Azali) in the first round," Soilihi predicted. "It'll be forced through."

"Everyone is against him," said the leader of the Juwa Party, lawyer Mahamoudou Ahamada. "If the vote were transparent, he couldn't win. Azali has no choice but to steal the election."

Azali, a former army chief of staff, first seized power in a coup in April 1999.

He toppled an interim president he saw as weak in handling secessionist forces, and then was elected in 2002.

Earlier this month, according to his staff, Azali survived an attempt on his life on Anjouan.

"People at the top of a mountain placed explosives, which they blew up to cause a rockslide" as his convoy passed, his campaign director, Houmed Msaidie, told AFP on March 7. "The president's car stopped in time."

Wires connected to dynamite were found at the scene, Msaidie said. Photos sent to AFP by a police official showed tree branches and rocks partially covering a road.

In March 2008, Comoran troops backed by an African Union military force invaded Anjouan to put an end to the authoritarian rule of island leader Mohamed Bacar.

The one-time police chief was accused of atrocities including killings, torture and rape, as well as embezzlement, but he escaped.

The Comoros has tried repeatedly to lay claim at the UN General Assembly to the fourth and wealthiest island in their archipelago, Mayotte, whose inhabitants chose in a 1974 referendum to remain a French territory.

The gap in development has drawn many Comoran "boat people" to Mayotte in search of a better life.