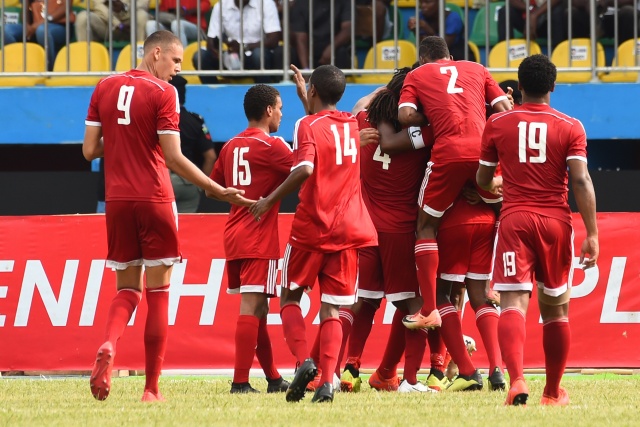 (AFP) - Defending champions Cameroon, Burundi, Guinea-Bissau and Namibia secured 2019 Africa Cup of Nations places on Saturday, raising to 19 the number of qualifiers for the tournament.

The remaining five places will be filled Sunday with South Africa among 11 countries hoping to make it to the June 21-July 19 showpiece in Egypt.

Cameroon needed a draw from a Group B clash with the Comoros in Yaounde, but overwhelmed the Indian Ocean islanders 3-0 with captain Eric Maxim Choupo-Moting among the goals.

Burundi were another side needing a point and they sealed a first Cup of Nations appearance by drawing 1-1 at home in Group C against Gabon, whose survival hopes rested on winning.

Namibia celebrated wildly despite a 4-1 Group K hammering in Zambia as they pipped Mozambique on head-to-head records for a place at the expanded 24-nation tournament.

Mozambique were poised to qualify when leading 2-1 in Guinea-Bissau entering stoppage time only to be undone by sloppy defending which allowed the home side to snatch a 2-2 draw.

Angola joined them Friday when they edged Botswana 1-0 to pip 2017 bronze medallists Burkina Faso for a Group I place.

After Paris Saint-Germain forward Choupo-Moting had given five-time champions Cameroon a half-time lead, Christian Bassogog and Clinton Njie netted in the second half.

Cameroon were the original 2019 hosts, which would have guaranteed them a place, but they fell behind with preparations and Egypt took over.

Cedric Amissi put Burundi ahead on 75 minutes only for Omar Ngandu to concede an own-goal soon after, creating a tense finish as Gabon sought a second goal and qualification.

But the Pierre-Emerick Aubameyang-captained visitors could not unlock the Burundian defence in Bujumbura and bowed out two years after hosting the Cup of Nations.

Mozambique came from behind in Bissau to equalise through Stanley Ratifo and Nelson Divrassone thought his goal with one minute remaining would be the match winner.

But a Mozambican defender clumsily headed a Guinea-Bissau free-kick against his post and Frederic Mendy reacted quickest to tap in the rebound.

That left Namibia as possibly the happiest 4-1 losers in African football history as they finished level on points with Mozambique, who they beat home and away last October.

Ivory Coast, Ghana, Mali and Senegal won matches that had no bearing on qualification and Niger fought back to draw 1-1 with record seven-time African champions Egypt.

On Sunday, former champions South Africa must avoid defeat to qualify at the expense of Libya, whose home fixture has been moved to neighbouring Tunisia for security reasons.

Africa » Be a reporter: Write and send your article » Subscribe for news alert
Tags: Fbl, Afr, 2019