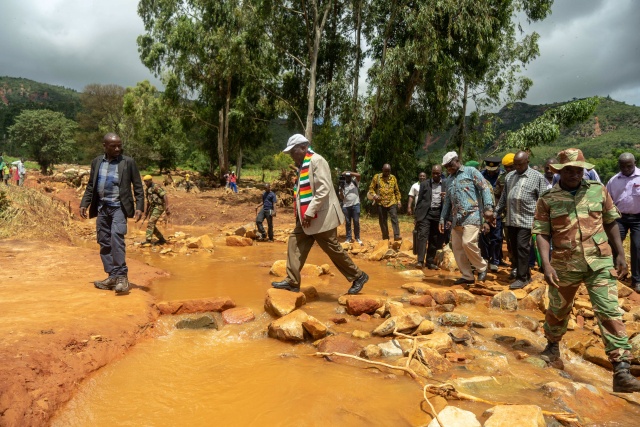 President Emmerson Mnangagwa (C) crosses a stream near Chimanimani Rural Hospital as he arrives to meet the survivors of Cyclone Idai, in Chimanimani on March 20, 2019. International aid agencies raced on March 20, 2019 to rescue survivors and meet spiralling humanitarian needs in three impoverished countries battered by one of the worst storms to hit southern Africa in decades. Five days after tropical cyclone Idai cut a swathe through Mozambique, Zimbabwe and Malawi, the confirmed death toll stood at more than 300 and hundreds of thousands of lives were at risk, officials said.(ZINYANGE AUNTONY / AFP)

Amid the ongoing crisis, Zimbabwean television ZBC on Sunday reported that a young woman had given birth while sheltering from the floods in a tree.

Speaking at a briefing in Beira, 1,000 kilometres (620 miles) northeast of the Mozambique capital Maputo, Lands Minister Celso Correia said it was now "inevitable that cases of cholera and malaria will arise".

The UN Office for the Coordination of Humanitarian Affairs' deputy head Sebastian Rhodes Stampa, also at the briefing, warned that disease outbreaks in inaccessible areas could be "really problematic".

The World Food Programme said Friday that the humanitarian disaster unfolding in Mozambique was on a par with the situation in Yemen and Syria which are both in the grip of civil wars.

Aid workers from across the world are continuing to arrive in the region to bring help to hundreds of thousands of affected people across an area of roughly 3,000 square kilometres (around 1,160 square miles).

Survivors are struggling in desperate conditions with some still trapped on rooftops and those rescued in urgent need of food and medical supplies.

"The government is already setting up a cholera treatment centre to mitigate cholera. We should not be frightened when cholera issues arise," added Correia, describing efforts to control the emerging humanitarian crisis.

"It is normal. It's almost inevitable. Malaria, we know how it arises. We have lots of wetlands and we're going to have malaria that is sure to come up (there)."

Wilfried Deliviai, a 19-year-old resident of Beira which was caught in the eye of the storm, said he felt "sorry for our town, our city, because we suffered a lot to build it".

"Houses are completely destroyed, and some people don't have money to rebuild their businesses -- and many businesses are going to fail," he told AFP.

More than two million people have been affected in Mozambique, Zimbabwe and Malawi where the storm started as a tropical depression causing flooding which killed 60 and displaced nearly a million people. Hundreds are still missing in Mozambique and Zimbabwe.

In its daily update, OCHA said 74,600 women impacted by the cyclone are pregnant and around 60 percent of them are due to give birth within the next six months. At least 7,460 of them are at risk of life threatening complications.

The International Committee of the Red Cross said it had recorded some cases of cholera so far but the UN was unable to confirm the reports.

Stampa described efforts to re-open the main access road to Beira as a "big victory".

"We will be able to bring more help to families living in this affected area," he said.

Those living in affected areas of Mozambique began to trickle back to church over the weekend.

The Ponta Gea Catholic Cathedral in Beira was miraculously undamaged by the storm while the church next door was levelled.

"The people don't know what to do because they lost their houses, they have no food, they don't know where to sleep -- this brings sadness and anxiety," said Father Pedro, who conducted a mass in darkness late on Saturday.

Much of the area hit by the cyclone remains disconnected from electricity supplies, complicating rescue efforts at night-fall.

As many as 109,000 people are living in shelters across central Mozambique, many of them located in and around Beira.

"Further, as many families have lost everything, some sleeping in the open, the risk of pneumonia, particularly among children increases considerably," he said.

One survivor was six-year-old Elena Joaquin, who clutched a coconut as she sat surrounded by pots and pans at a shelter in Buzi, southwest of Beira, where she had sought refuge along with her parents.

He also highlighted the need to helping people living with HIV/AIDS of to resume treatment as soon as possible in the Sofala, which has one of the highest rates of HIV infection in Mozambique.

But life had slowly begun to return to normal in central Beira where traffic was flowing more than in recent days and business were resuming trade.