Relief, and questions, in Norway after dramatic cruise rescue 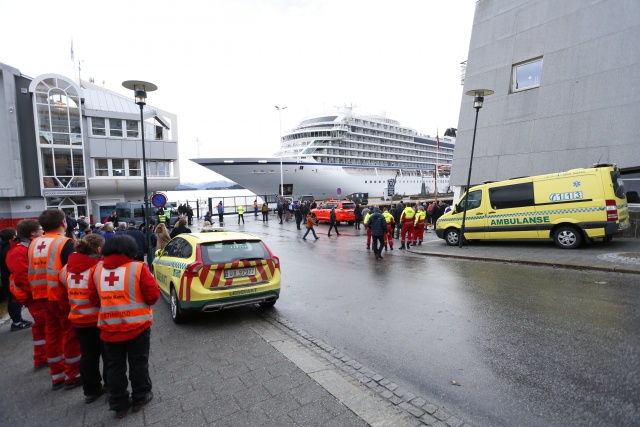 The cruise ship Viking Sky, that ran into trouble in stormy seas off Norway, reaches the port of Molde under its own steam on March 24, 2019. Escorted by tugboats, the Viking Sky arrived at the port of Molde. Nearly a third of its 1,373 passengers and crew had already been airlifted off the ship after it lost power along a stretch of Norwegian coastline notorious for shipwrecks. (Svein Ove EKORNESVAAG / NTB scanpix / AFP)

(AFP) - Norway breathed a collective sigh of relief on Monday after the dramatic rescue of a stricken cruise ship off its coast, but questions mounted about why the vessel chose to sail into notoriously perilous waters in a storm.

The Viking Sky, carrying 1,373 passengers and crew, sent out a mayday call on Saturday after it lost power in stormy seas, as it was tossed about in 15-metre (50-foot) waves that sent tables and furniture sliding from side to side.

The incident led to a spectacular airlift rescue. Images from the scene spread widely in the media and on social networks over the weekend.

It was one of the biggest rescue operations in modern times, with almost 500 passengers, many of them elderly, airlifted off the ship through day and night by a relay of helicopters fighting heavy winds.

Remarkably, just 28 people were hospitalised and only one suffered serious injuries.

"The risk to the passengers and the vessel was high," Dag Sverre Liseth, director of the marine department at the Accident Investigations Board Norway, told AFP.

"It could have been worse, but thankfully, it all ended well."

The agency has launched an investigation into the incident, which could quickly have turned to tragedy.

With only one of its four engines working, the ship drifted dangerously close to rocky reefs notorious for shipwrecks.

At the last moment the crew managed to drop anchor on Saturday about two kilometres (1.2 miles) from shore, stabilising the situation.

With three of four engines restarted on Sunday, the vessel set sail under its own power for Molde, 500 kilometres northwest of Oslo -- about 26 hours after issuing the mayday call.

One of the questions investigators will have to look into is why the Viking Sky, which was en route from Tromso in the north to Stavanger in the southeast, took the risk of sailing through that tricky stretch of water when a storm had been forecast.

"I don't want to speculate on that but it's one of the aspects we'll look at in our investigation," Liseth said.

The decision by the Finnish captain of the Viking Sky raised several eyebrows in Norway, especially since the famed Coastal Express, a tourism boat that criss-crosses the country's coast, had chosen not to sail through that stretch and instead flew its passengers by plane.

"We have no particular opinion on the question of whether it was particularly controversial to do that," Eirik Walle, a Norwegian rescue centre official, told AFP.

"Even if other ships decided to stay docked in port, there was a lot of maritime traffic in the area at the time," he said.

Rescue services were also called on to help a merchant vessel in trouble in the region on Saturday. The nine crew members, in survival suits, had to jump into the chilly waters before being winched to safety by helicopters.

The owner of the Viking Sky, Torstein Hagen, on Sunday ruled out that the decision to sail despite the storm was taken due to financial considerations.

"I would like to personally apologise for what our guests experienced," Hagen said Monday in a statement in which he also thanked the rescuers, authorities and crew.

The US National Transportation Safety Board (NTSB) has offered to take part in the Norwegian inquiry, since around 600 of the passengers were American.

As passengers began returning home, many of them praised the Viking Sky's crew and the rescuers who helped them, and well as those who received them once they reached dry land.

"I'll tell you, the people have been amazing," one passenger told the TV2 channel while he waited for his flight home from Molde airport.

"Not only the folks in the helicopters and standing by for those of us who stayed on the boat. But all the people in the dock... It was amazing."