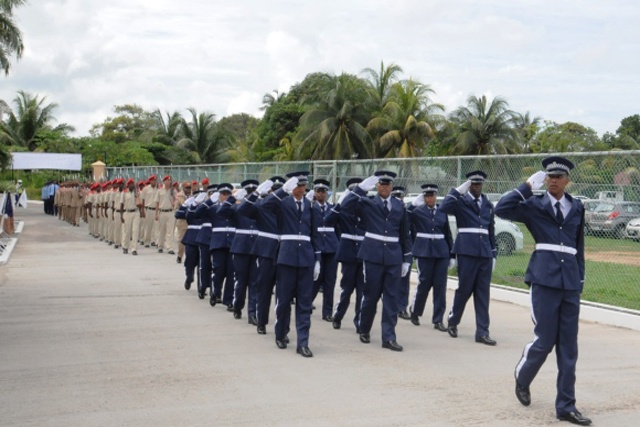 (Seychelles News Agency) - As they seek ways to deter criminal activities and ways to be better equipped to fight terrorism, organized transnational crime such as drug trafficking, cyber-crime, counterfeit medicines and environmental crimes, police chiefs from across the African continent are working on the setting up of a police organization for all of Africa.

Police chiefs from some 40 African countries including Seychelles, meeting in Algiers in February this year agreed on the establishment of the African Police Cooperation Organization – AFRIPOL.

In an interview with SNA, the Seychelles Police Chief Commissioner Ernest Quatre said that while Interpol remains the world’s largest police organization, AFRIPOL which will be similar to other continental bodies like Europe’s Europol for example, will allow better networking and faster flow of information when dealing with criminality in Africa.

“It will not be only EAPCCO, SARPCCO, WAPCO or other regional bodies. AFRIPOL will help us to come together to share information faster and know each other better. Each country has its own jurisdiction, the laws may not necessarily be the same but when it comes to addressing criminality we have the same goals the same objective,” said Quatre.

It is expected that AFRIPOL will be operational next year, though no precise date has been set yet and Algeria will be the first to head the regional body which will be headquartered in Algiers.

A report on the establishment of AFRIPOL is expected to have been presented to the African Union as the African police chiefs have agreed to request the AU Commission’s help to finalize the legal frameworks governing the organization including its operation and funding.

Quatre told SNA that all countries involved have agreed that they will need to have staff, mostly police officers, seconded to the organization as is the case with Interpol.

As details are finalized for AFRIPOL to become operational, the police forces of the eastern and southern regions of Africa are already engaging in combined efforts to tackle different types of criminality affecting the region.

At the end of a two-day post action workshop the police organizations of the two regions, EAPCCO and SARPCCO held last Friday and Saturday at the Seychelles’ International Conference Centre, agreed continue with their joint implementation of the operation codenamed USALAMA which targets various types of transnational crimes.

The workshop found the implementation of USALAMA 1 which took place simultaneously in May this year in member states of both the EAPCCO and SARPCCO in collaboration with the Regional Centre for Small Arms and Interpol Africa through its offices in Kenya and Zimbabwe; to be an even bigger success than the first operation in 2013.

All the same the workshop identified certain areas for improvements and said that while no major challenges have come out there is a need for certain member countries to be more committed to the operation, while others needed to be speed up their implementation. It came out that some of the countries received the necessary equipment being supplied by Interpol for the conference, late because they had not effected the proper follow-up.

Meanwhile the participants of the workshop found that much progress has been made in other areas.

“More criminals were apprehended this time around and while we still need to boost up our communication amongst ourselves, even this worked better than it did last time. Some countries were able to recover certain vehicles which had been stolen in one country and were destined for sale elsewhere. We have seen that there have been more arrests in regards to copper offences and certain state have been able to greatly hinder ivory poachers in their operations,” said Seychelles Police Commissioner Ernest Quatre at the end of the workshop.

‘On our side we concentrated on the crime of illicit drugs trafficking and we involved other local bodies such as the NDEA, the Customs department and airport security. As a result of this week long exercise, we were able to make significant arrests and seize important amount of drugs destined for sale on our streets and affecting our youths,” he added.

The workshop also resolved to ask other like organization such as the police chiefs’ organization in West Africa-WAPCO- to join with EAPCCO and SARPCCO in the USLAMA1 operation.

Seychelles is a member of both EAPCCO and SARPCCO with the island nation’s police commissioner Ernest Quatre currently chairing EAPCCO.

Quatre told SNA that over the past year he has witnessed the setting up of several centres of excellence like one on peacekeeping in Addis Ababa, one on human trafficking in Djibouti.

A Centre of excellence for maritime piracy and international crimes has also been set up in Seychelles based at the Regional Fusion and Law Enforcement Centre for Safety and Security at Sea (REFLECS3) which is the successor of the Regional Anti-Piracy Prosecutions Intelligence Coordination Centre (RAPPICC) which started operations in 2012.

“Kenya which has the most centre of excellence like on border control, terrorism etc….has also teamed up with Seychelles and Tanzania to set up a joint investigation team (JIT) to investigate piracy cases…(….)..As EAPCCO members we are also developing manuals on how to deal with certain offences for example we have completed one on terrorism,” Quatre added.

As EAPCCO chairman Quatre says he has been visiting the member countries, in March he visited Ethiopia, Djibouti, Kenya and he will be travelling to Rwanda Burundi, Tanzania and maybe Uganda in August.

“I need to present a report on this one year tenure, to say what I did as the chairman, what each country have achieved or failed to achieve and why, what difficulties each one encountered. This is necessary so that we can discuss and see how we can resolve what has not been achieved so far and this will be taken up by the next chairman.”

Kenya is expected to take chairmanship of EAPCCO at the next AGM of the organization to take place later this year while SARPCCO’s chairmanship currently led by Namibia will be handed over to Lesotho.