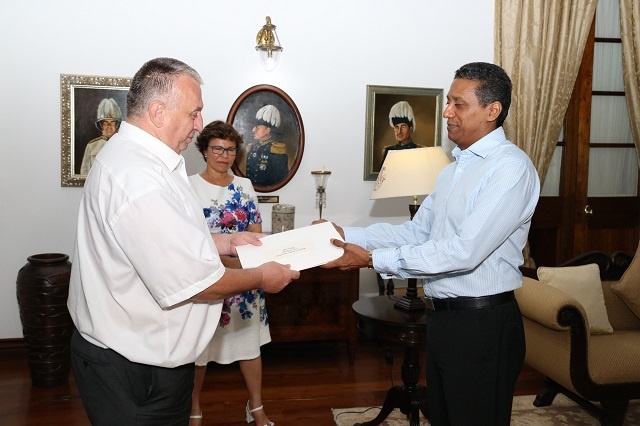 Pavel Mikeš presented his credentials to President Danny Faure at State House, in the capital Victoria.

“I don’t want to only speak about the economic and political relations. Both our countries are very strong in art and we would like to develop that further. We want to introduce Seychellois artists in the Czech Republic and in the whole of Europe and why not have Czech artists come to Seychelles,” Mikeš told reporters.

Mikeš said that during the meeting with Faure the discussion also touched on education and the progress the two countries have made in this sector. Health was another subject raised.

“A lot of Seychellois are studying in the Czech Republic. We have very good cooperation in the health sector. We have many Czech doctors in Seychelles, but we want to train and educate more Seychellois doctors in our country. There is a memorandum of understanding being prepared between the Charles University in Prague and the University of Seychelles,” said Mikeš.

The ambassador and President Faure also discussed human relations and friendship between the two countries.

“As you know the base of the Czech and Seychellois relation is very strong and dates back to the 80s. We had a very close connection with late President Albert Rene. Even though the regime has changed in both countries the human base is still there,” said Mikeš.

Talking about the economic performance of the Czech Republic, the ambassador said that his country is a member of the European Union (EU) and it is doing economically very well.

“We have zero unemployment and a very strong currency,” he said.

The ambassador will be based in Addis Abba, Ethiopia.

Diplomacy » Be a reporter: Write and send your article » Subscribe for news alert
Tags: Charles University