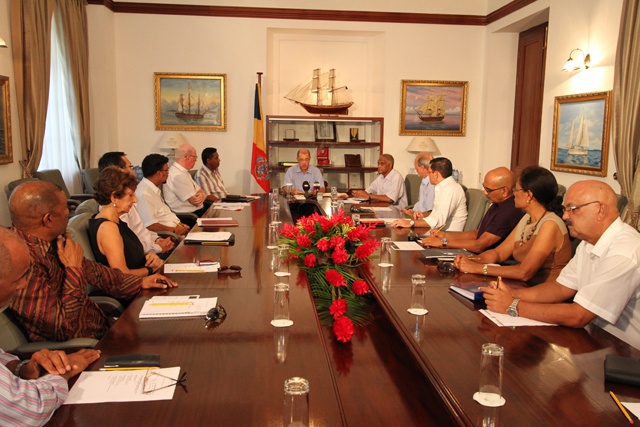 The 15 member forum including Michel as the chair is made up of individuals representing a large cross section of society, notably the church, civil society, business, education, tourism and other fields.

The first meeting this morning amounted to a preliminary exchange of views to form the basis for the agenda at the next meeting.

In a press statement issued this afternoon State House has highlighted some of the issues which the members have highlighted as areas of concern that need to be addressed.

These include education and training, the need for improvement in the various economic sectors especially in the tourism and related areas, the need for accurate statistical information and indicators of performance, the strengthening of financial services and their oversight, the importance of effective mechanisms for ensuring law and order, the elimination of unnecessary bureaucracy and the need for authorities to process applications for various services, licences or planning permissions in a manner that was fairer, faster and more efficient.

“The importance of environmental protection was strongly highlighted (…) Members advocated emphasis on the growth of moral and spiritual values, and good parenting, with the protection of families being taken into account in the ongoing revision of the civil code. It was felt that there a need for better understanding by citizens of their individual rights and responsibilities,” reads the statement.

“Members felt there was a need for greater balance in the news coverage of the SBC, which it was felt was dominated by reports on Government related activities. The need to overcome political differences was considered vital to the success of the Forum. Importance of developing trust and stronger bridges between Government and the private sector was also strongly advocated,” adds the statement.

Welcoming the members this morning, Michel said the new National Consultative Forum will have a role that no other consultative body presently has, serving as “an avant-garde think tank that crosses political boundaries, …(…)… it can serve as a venue to advise on remedies to certain grievances of the past. It may also consider major constitutional reforms.”

Describing the members as people who represent a large cross-section of society, having a great diversity of views, opinions and interests, Michel referred to them as men and women of integrity, and Seychellois citizens who he says have distinguished themselves by their knowledge, their experience, their goodwill and service to the nation.

“This matters. It is of utmost importance. Yet of greater importance is the fact that the national interest comes first. There can be no greater cause than this. And we are all united in that cause. We are all committed to the greater good. To the moral and spiritual upliftment of the people of Seychelles. To the material wellbeing and the happiness of our nation. To national unity. To reaching out and building bridges. To healing old wounds. To building a resilient, God-fearing and confident nation,” said Michel.

Michel reiterated his National Day address that there are no taboo subjects that cannot be addressed by the Forum and stressed that the members are absolutely free to discuss any and all issues that directly impact the national interest and to make proposals concerning the future of Seychelles in any domain.

“I am sure that you will agree with me that political polarisation has plagued this country for far too long. What is beautiful is that we are all meeting here today at this table, able to discuss, able to exchange views and ideas for the good of Seychelles, building bridges where there is a divide. I am sure your contributions will be very important for the future of the country.”

Most of the members were contacted by the State House to serve on the Consultative Forum and responded positively.

Speaking to SNA, Marguerite Mancienne, Deputy Director of the Independent School, a private institution offering primary and secondary education up to Advanced Level studies said: "I hesitated a bit at first. But as a citizen, I am very concerned by some issues on education and I decided it was a good way of making by views known. It was no good just murmuring in the corridors."

Mancienne, who also heads the secondary studies, has been with the private school since its opening in 1992.

Renowned Seychellois Singer, musician and composer, Patrick Victor, said he was also approached by the Seychellois Head of State.

"I was told I am not representing solely local artists and I made known I have a lot to say." he told SNA

The Head of the Roman Catholic Diocese in Seychelles, Bishop Denis Wiehe believes that the forum can have a positive impact on the country.

"There is definitely a need for dialogue in our society. I think the President has seen it and felt it. We definitely live better together when there is collaboration. I can say that because as Chairman of the Inter-Faith Council, we have since it was constituted five years ago, learned to listen to each other. We have important differences, but share also many things in common, the main one being our belief in God," said Wiehe.

Besides President Michel who is chairing the Forum, there are also 14 other members, who the president have described as “individuals – irrespective of their political affiliations – who have distinguished themselves by their knowledge, their experience, their goodwill and service to the nation.”

"Its ( the Forum's) members  will be entirely free to debate any issue that concerns the future of Seychelles in any domain- national unity, inclusivity, politics, economics, social, moral , cultural etc" the President said in his National Day Address in June.

The members of the Forum are:

The members of the new National Consultative Forum have agreed to meet monthly.