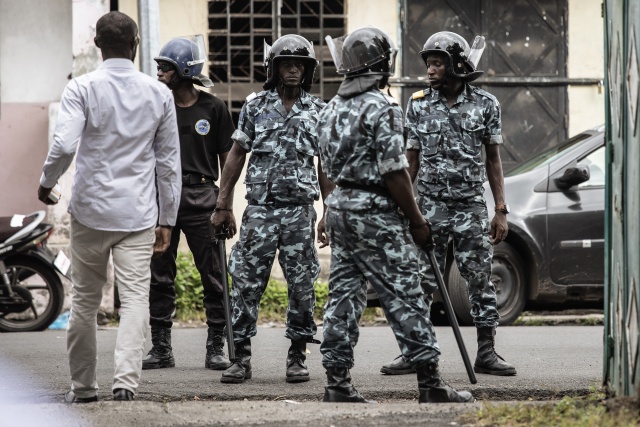 Comoros Gendarmerie officers stand guard at the main gate of a residence where a meeting of opposition leaders is taking place on March 24, 2019 in Moroni, Comoros. Voters on the tiny archipelago of Comoros went to the polls on March 24, 2019, with incumbent president widely expected to win a new term in an election that rivals say has been hijacked. The main opposition alleged that irregularities at several polling stations reported by the electoral commission amounted to a "coup d'etat" and called for public "resistance". (GIANLUIGI GUERCIA / AFP)

(AFP) - The African Union has called on all sides in Comoros to "show the greatest restraint" amid violence and a political crisis in the wake of disputed elections.

AU commission chief Moussa Faki Mahamat said he was "concerned about the deterioration of the political and security climate" on the Indian Ocean archipelago, in statement released late Friday.

Comoros is in the grip of a political crisis following President Azali Assoumani's victory in March 24 polls, that his opponents say was rigged and led rivals to unite against him.

Mahmat added he "deplores the violence that resulted in loss of life."

Violence broke out in the Indian Ocean nation after a defeated presidential candidate bidding to unseat the president was arrested.

Both observers and community groups have questioned the credibility of the election, which saw Azali declared the winner with almost 61 percent of the vote.