Cholera cases mount to over 1,000 in cyclone-hit Mozambique 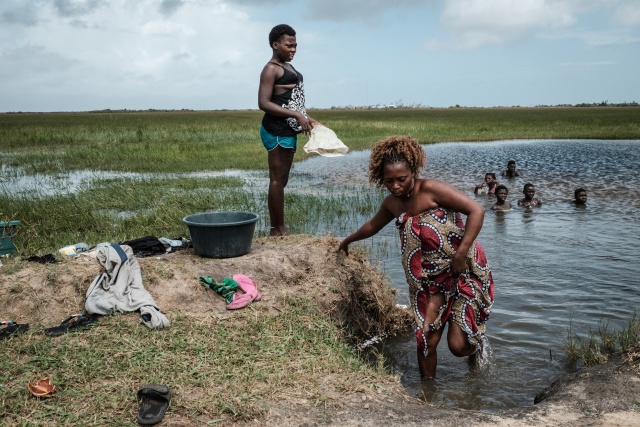 A woman comes out of the water which was flooded in Beira after cyclone Idai smashed into Mozambique, on March 27, 2019. Five cases of cholera have been confirmed in Mozambique following the cyclone that ravaged the country killing at least 468 people, a government health official said on March 27, 2019. Cyclone Idai smashed into Mozambique on March 15, unleashing hurricane-force winds and heavy rains that flooded much of the centre of the poor southern African country and then battered eastern Zimbabwe and Malawi. (Yasuyoshi CHIBA / AFP)

(AFP) - Cholera has infected at least 1,052 people in Mozambique's cyclone-hit region, the health ministry said Monday in a new report, marking a massive increase from 139 cases reported four days ago.

The mounting cases represent on average more than 200 cases of new infections each day.

Although hundreds have been taken ill with cholera since last week, only one death has been reported so far, tallies compiled by the ministry showed.

A mass vaccination campaign is due to be rolled out on Wednesday as authorities and aid workers are scrambling to avert an epidemic more than two weeks after a devastating cyclone slammed Mozambique.

Some 900,000 doses of oral cholera vaccines were due to arrive in the cyclone-battered Beira city on Tuesday, from the global stockpile for emergency, according to the World Health Organisation (WHO).

The central city of Beira is the worst affected, accounting for 959 out of the total 1,052 cases.

The city of more than half-a-million people recorded 247 cases in 24 hours between Sunday and Monday morning.

Cholera is transmitted through contaminated drinking water or food and causes acute diarrhoea.

The numbers of cholera cases is expected to rise due to the increasing numbers of people reporting to health centres with symptoms, said the WHO in a statement.

"The next few weeks are crucial and speed is of the essence if we are to save lives and limit suffering," WHO chief for Africa, Matshidiso Moeti, said in the statement.

Cyclone Idai killed more than 700 people across Mozambique, Malawi and Zimbabwe and hundreds of thousands have been left homeless -- many of whom have been forced to use dirty water supplies. At least 518 of those deaths have occured in Mozambique.

Experts have warned that the destruction of drinking water sources and lack of sanitation in overcrowded shelters in Mozambique create breeding grounds for waterborne diseases such as cholera.

To control the outbreak, vast quantities of drinking water and water purification units have been delivered to affected areas.

A publicity blitz to raise awareness of the cholera situation is also under way.

More than 146,000 people have been displaced from their homes by the cyclone and subsequent floods are are sheltering in 155 sites across four provinces of Sofala, Manica, Zambezia and Tete, according to the UN.