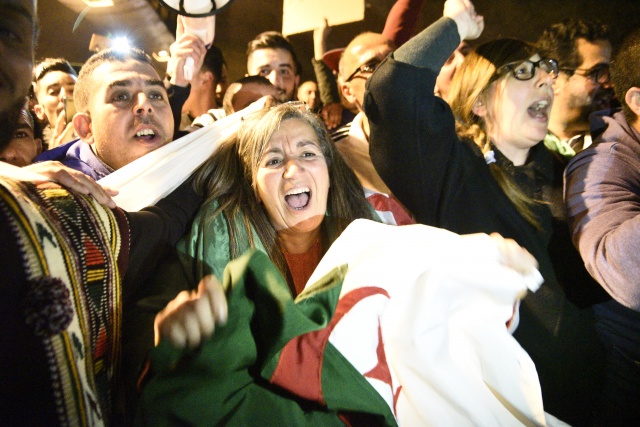 Car horns sounded on the streets before jubilant crowds converged in the centre of the capital Algiers to cheer his departure.

Many Algerians have never known any president other than Bouteflika, who held power for two decades but was rarely seen in public since suffering a stroke in 2013.

Protesters in Algiers welcomed his departure but said they were determined to continue demonstrating, rejecting any transition that leaves power in the hands of the "system".

"I want my daughter to remember this historic day. Bouteflika's gone, but it's far from over," said 35-year-old Amal, who wore a T-shirt with the slogan "I am against the system" and vowed to march again on Friday.

For 44-year-old engineer Hamid Boumaza, Bouteflika's resignation was "too little, too late".

"Bouteflika's departure is no longer enough. We want them all to go. We want full freedom and we will march for as long as necessary."

Algeria's Constitutional Council said Wednesday it had accepted Bouteflika's resignation and informed parliament that his post was officially vacant.

Some 20 Algerian civil society groups said they would refuse a transition of power that kept the same structure in place, calling for protests Friday for "democratic change".

"Bouteflika's resignation... is a first victory... but it is not enough," they said in a joint statement.

Algeria's constitution says that the speaker of the upper house of parliament, currently 77-year-old Abdelkader Bensalah, should now act as interim leader for up to 90 days during which a presidential election must be organised.

Algeria has largely avoided the turmoil unleashed by the Arab Spring uprisings that brought down rulers in neighbouring Tunisia and Libya.

But discontent, particularly among the young, turned to anger after Bouteflika announced in February that he would seek a fifth term in office in an election that had been scheduled for this month.

He dropped his bid in the face of the mass protests but also postponed the vote, angering Algerians who saw the move as a ploy to stay in power.

Soon after, state television announced that Bouteflika had submitted his resignation to the Constitutional Council.

The decision aimed "to contribute to the appeasement of the hearts and minds of my compatriots, to allow them to take Algeria towards a better future to which they legitimately aspire," his resignation letter read.

Footage showed Bouteflika, dressed in a beige North African tunic and sitting in his wheelchair, handing the letter to the council's head, Tayeb Belaiz.

In another letter published Wednesday by state news agency APS, he offered his apologies to the Algerian people for "every shortcoming", but said he was "proud" of his contribution to the country.

"I leave the political stage without sadness or fear for the future of our country," he wrote.

"God is witness to my sincerity and my loyalty."

Former prime minister-turned-rival Ali Benflis said his departure was the "woeful epilogue" to the past two decades and praised the protest movement as "a peaceful people's revolution".

UN Secretary-General Antonio Guterres praised "the mature and calm nature in which the Algerian people have been expressing their desire for change," said a UN statement.

"He looks forward to a peaceful and democratic transition process that reflects the wishes of the Algerian people," it added.

The United States said the future of the country "is for the Algerian people to decide".

Long-time ally Russia called for a transition without foreign "interference".

The foreign minister of former colonial power France, Jean-Yves Le Drian, said he was confident Algeria's "democratic transition" could continue "in the same spirit of calm and responsibility" seen in recent weeks.

Algerian business tycoon and long-time Bouteflika backer Ali Haddad was placed in detention Wednesday, days after being arrested while trying to cross into Tunisia with undeclared currency and two passports.

Haddad, described by Forbes as one of Algeria's wealthiest entrepreneurs, was widely seen as a political tool of Bouteflika.

The judiciary has launched graft investigations and, local media report, banned a dozen Bouteflika-linked businessmen from leaving the country.