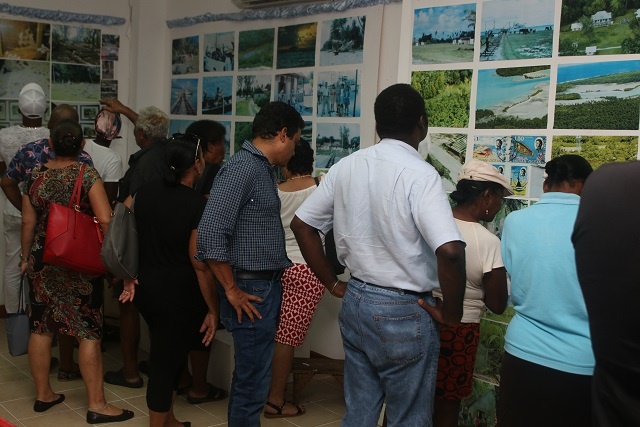 The struggles of the Chagossians, who were forcible removed from their islands in the late 1960s, have been made more visible to Seychellois through an exhibition. (Joe Laurence, Seychelles News Agency)

((Seychelles News Agency)) - The struggles of the Chagossians, who were forcibly removed from their islands in the late 1960s, have been made more visible to Seychellois through an exhibition.

The displays showcasing the islanders’ way of life back then, the United States military base and visits by the displaced population in recent years is organized to show support to the people from Chagos by a local theatre group.

The MODESTI group, in partnership with the Seychelles National Arts Council, opened the exhibition last Friday.

On display are photos as well as objects – some personal items such as iron, wooden chests, and traditional cooking pots – which the families brought with them when they were sent to Seychelles – an archipelago in the western Indian Ocean.

Angelin Marie, the chair of MODESTI, said: “We wanted to give support and value to the Chagossians in their struggles to reclaim their islands.”

Marie – an actor – said in addition the group had produced and performed a piece about the islanders. “My mom used to work there and always recounted her days on the islands. After some personal research, and staying clear out of controversial issues, we came up with a piece recounting a love story between a Seychellois and a Mauritian both living in the Chagos islands.”

An excerpt of the drama was also performed at the ceremony to commemorate World Theatre day which was on March 27.

Fifty years ago Britain separated the Chagos Islands from its colony Mauritius, expelling the entire population to make way for the installation of a U.S. military base that is today highly strategic.

Whilst opening the exhibition at the Carrefour des Arts gallery in Victoria, the chief executive of the National Arts Council, Jimmy Savy commended the group for choosing to showcase the plight and struggles of the displaced people through art.

“We all know that culture is a way of life of a nation, and art is used to showcase culture, and when a culture is affected, a whole way of life is ended, a whole generation is terminated as the roots are uprooted,” said Savy, who called on other artists to join and support the displaced population.

Seychellois Anthropologist Jean Claude Mahoune who also addressed those present called for a moment of silence for all Chagossians who have passed away in exile.

Giving an overview of the history of the islands Mahoune questioned the true population who were removed from the Chagos islands. “They say there was around 2,000, but I think the real number may be four times more of what is being said. I will soon be starting research on just that!”

The exhibition is open to members of the public until April 15.