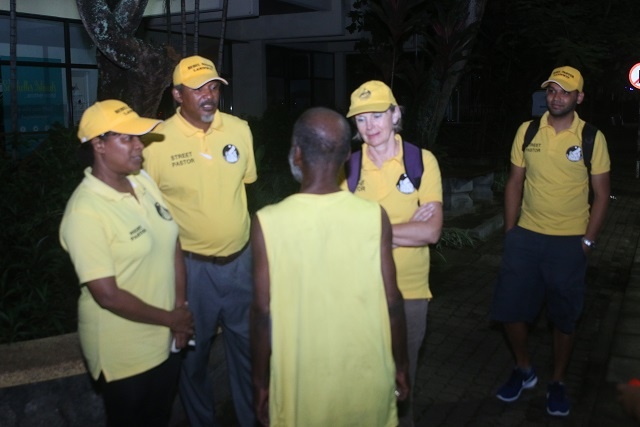 (Seychelles News Agency) - A volunteer group of after-dark pastors who work with the less fortunate said more love and understanding are needed to prevent people who abuse drugs from living transient and homeless lifestyles.

Seychelles’ Night Pastors, a volunteer Christian group, has been concentrating their work night ministry and providing basic necessities in the capital city of Victoria.

The group was founded four years ago and is an initiative of the Anglican Church of Seychelles and Victoria Howard, a UK-based Seychellois. Howard founded a similar organisation in west Cornwall, United Kingdom.

“Ministry of the night or street pastors are found all over the UK, Europe, Australia and even in Africa, in Nigeria to be precise,” explained Howard, who volunteers and works a lot with the homeless in her home city in England.

Howard adds: “We basically are serving God by serving others and doing what Jesus said, clothe the naked, house the homeless. Here I have had the first experience with working with sex workers and people who due to substance abuse are homeless.”

“Sesel Paster Lannwit” as it is known in Creole not only distribute basics such as food, water and care packs but also offers prayers and counselling to women and men found on the streets of the capital city at night.

Archdeacon Danny Elizabeth, chair of the board of the group, said “We go out when it is dark. In this darkness, many things happen. Some are visible whilst others are unseen. We meet and listen to untold stories and unheard cries for help. We pray with the needy. We encourage them ‘to get up’,” said Elizabeth, who added, “our joy is when someone says I had someone who lifted me up when I was down.”

According to Howard, the sex workers are most difficult to work with compared to alcoholics and heroin addicts.  “They never have time to listen as in their eyes, they are working, but nevertheless we do approach them and give them hygienic packs,” explained Howard.

Sonia (not her real name) is one person whose life has turned around since her encounter with the local night pastors last year.

“When I met the group, I was on the streets and had been involved in sex work before.  I found myself on the street after a family member abandoned me. The group helped me to let go of my bitterness since my relative was no longer alive,” explained Sonia - currently in employment - who said she was very appreciative of Paster Lannwit’s counselling and prayers.

Howard, whose expertise has helped to create the group, is the daughter of Archdeacon Charles Roach, who worked with the Seychelles Anglican Diocese from 1951 to 1955.

Named after the capital city of the Seychelles – a group of 115 islands in the western Indian Ocean, Victoria Howard visits every year and participates actively in the night ministries which are held from 10 p.m to 2 a.m.

“Since we started we have been working in town, but in the future, we want to decentralize our mission and work in other districts especially those bordering with Victoria,” said Howard.

Howard said that Seychelles’ Night Pastors currently has 50-plus members from both the Catholic and Anglican Churches. In the future, with the donation of a car, the charity hopes to transport the homeless to the night shelter or even if there is the need, to the shelter for abused women.

The group has also welcomed the ban on the sale of alcohol in Market Street, which is a hot spot in the capital city.

Elizabeth said that Seychelles Night Pastors' vision is that “more people of faith can step out of their comfort zone and help the needy in the community.”

Eager to serve in the country of her birth: British Anglican mission volunteer launches Night Pastors in Seychelles