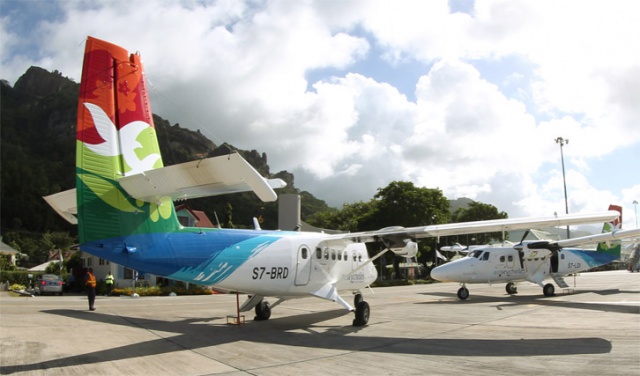 (Seychelles News Agency) - Isle of Bird, one of Air Seychelles’ two new DHC-6 Twin Otter Series 400 aircraft landed at the Amitié Airport on Seychelles’ second most populated island of Praslin for the first time this morning.

Five passengers including 2 French nationals were on the flight which was greeted by a traditional water canon salute at the Praslin airport.

Together will Isle of La Digue the two aircraft that can carry 19 passengers each, will operate between the main island of Mahé and Praslin as well as to other islands in the archipelago including Bird, Denis and Fregate. According to Air Seychelles it operates around 34 flights between Mahé and Praslin per day but this fluctuates at times.

Air Seychelles took delivery of the Isle of Bird and Isle of La Digue from their manufacturer Viking Air Limited of Canada, on July 15.

From Churchill, Canada, the two aircraft travelled 17, 000 km with several stops in Iceland, Sweden, Serbia, Egypt and Kenya before reaching the Indian Ocean archipelago, being flown by two Seychellois pilots.

Isle of La Digue made an additional stop at the Farnborough Airshow in the United Kingdom.

According to a press statement issued by Air Seychelles, President James Michel who was amongst guests at the airport to welcome the two new Twin Otters described the event as a “proud milestone in history of Air Seychelles.”

“..I feel particularly proud of the Seychellois crew members and staff who have worked so hard and come so far to create a new and revitalised Air Seychelles. These two aircraft will no doubt brighten our skies as well as enhance our domestic services,” said Michel.

It was in October last year that Air Seychelles announced the multi-million dollar deal for the purchase of three DHC-6 Twin Otter Series 400 aircraft from Viking Air with deliveries originally scheduled for mid-2015.

“The Twin Otters have renewed our domestic fleet and their early delivery is a clear demonstration that we are on the right track with our business. We intend to grow our domestic operations further, and we have the right tools now in place to better serve the growing demand for more access to and from the various islands that make up this beautiful archipelago,” said Air Seychelles Chief Executive Manoj Papa in the statement.

“Our customers will experience better onboard comfort, pilots will fly new technology, and Air Seychelles will remain the vital link that connects businesses, families, friends and visitors with the very best of what Seychelles has to offer.”

The third Twin Otter aircraft ordered from Viking Air is expected in the country by the third quarter of 2015.

“Our investment in new aircraft is a result of the success of our turnaround program and of our strong and rewarding partnership with Etihad Airways. Our new Twin Otters will secure the future of inter-island air services and boost Seychelles tourism,” said Joel Morgan, Chairman of the Air Seychelles Board also the island’s Minister for Home Affairs and Transport.