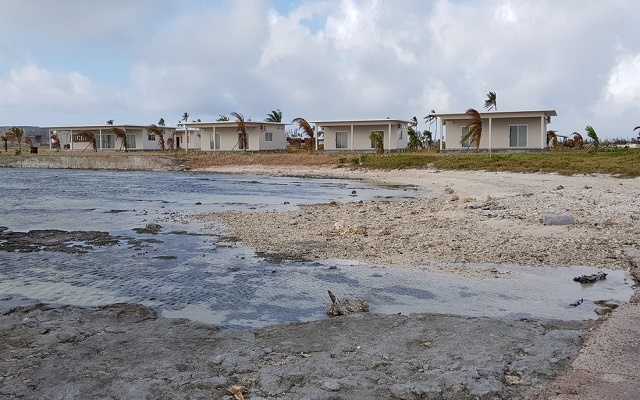 The cyclone-proof guesthouses facilities have been built and are already being used.  (www.idc.sc) Photo License: All Rights Reserved

(Seychelles News Agency) - Major infrastructures on the island of Farquhar have been repaired and made cyclone-proof almost three years after Fantala, a tropical cyclone, hit the outer island, said the head of the Islands Development Company (IDC).

The IDC’s chief executive, Glenny Savy, told SNA that the company “concentrated on the infrastructure that we need for commercial purposes, mainly guest-houses that we rent out to fly-fishing enthusiasts. Part of the money that we make goes towards the restoration of the island.”

Savy said most of the infrastructures used in the day-to-day running of the island are ready. These include newly built cyclone-proof facilities for both staff and tourists that come to the island for fly-fishing, a new generator room with new equipment and a desalination plant.

Farquhar, which lies 700 kilometres south of the Seychelles main island, Mahe, suffered significant damages when it was hit three times by Fantala in April 2016. The island was declared a disaster area and after a one-week assessment, a World Bank team said the cyclone caused $4.5 million in damages and losses on Farquhar.

Fantala brought winds of 330 to 345 km/hr which severely damaged the island’s infrastructure including guest houses, staff accommodation, and generator room and desalination facilities, among others.

IDC, a parastatal company which manages some of the outer islands, financed the restoration work using around SCR 8 million ($588,000) received from its insurance company as well as revenue generated through its economic activities.

Savy said that three main infrastructures will be built shortly and will include a new radar system, managed by the Seychelles Coast Guard, to be funded by the Indian government. A new ‘Grann kaz’ or colonial house – a historic monument on Farquhar that will be used as a museum and a new conservation centre -- will also be built for research purposes.

“The Island Conservation Society is undertaking a lot of research on Farquhar’s fauna and flora, as well as on its marine life. They need more facilities such as laboratories to facilitate research,” he said.

Data collected from the research will determine whether IDC will increase the number of guest-houses in future. There are presently six bedrooms which can accommodate 12 people per week.

The chief executive said the number is sustainable for now, taking into account the fragility of Farquhar.

“Our policy is environment first. More tourists might mean more revenue, but in the long-run, more human activities might have a detrimental effect. At present, it is more economically viable to have fewer people and charge them more than to have more people who might eventually destroy the island. Tourists come to Farquhar because they know it has something exceptional to offer, so we want to keep it that way,” he added.

Tourism activities contributing the most to the IDC’s revenue with fly-fishing packages which include accommodation costing $40,000 per week per person. The tourism season on Farquhar starts from October to mid-May with a six-week break in late December and January.

IDC also plans to restore the island’s vegetation within the next five years and planting commercially viable trees, such as coconut that is used in oil production and animal feed. The island also wants to produce its own timber.

Since the restoration of vegetation is not covered under the insurance money, Savy said IDC has approached the World Bank for assistance.

“We want to access the loan for countries affected by natural calamities that can be repaid over a 20-year period. It is important that we restore Farquhar to its natural state as soon as possible ”, says Savy.

IDC, which manages some of the outer islands of the 115-island archipelago in the western Indian Ocean, has been managing Farquhar since the mid-1980s. The company generates most of its revenue from tourism. For the period 2017-2018, the company’s total revenue was $33.6 million (SCR458 million).