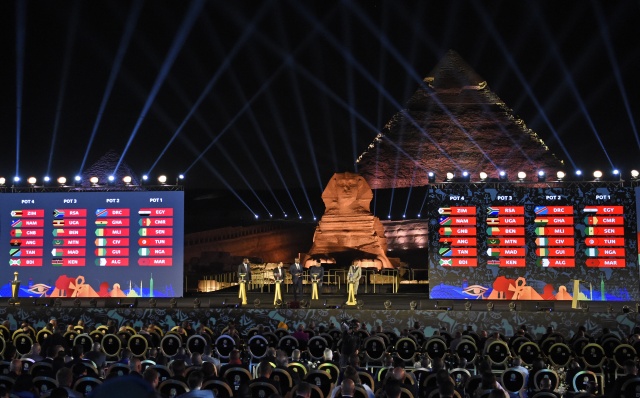 This picture taken on April 12, 2019 during the 2019 CAF African Cup of Nations (CAN) draw ceremony shows the pots' composition with the Pyramid of Khafre (Chephren) and the Sphinx in the background at the Giza Pyramids Necropolis on the western outskirts of the Egyptian capital Cairo. (KHALED DESOUKI / AFP)

(AFP) - Under the gaze of the Sphinx, a spectacular Africa Cup of Nations draw in Giza on Friday night produced an intriguing set of groups that leave many riddles to be answered.

After an open-air event against the illuminated backdrop of the pyramids, hosts Egypt, winners of the competition a record seven times, will face double champions Democratic Republic of Congo. Uganda and Zimbabwe fill the last two places in Group A.

Egypt will kick off the event against Zimbabwe in Cairo on June 21. The tournament ends on July 19.

Group F in the 24-team tournament brought together the second and third most successful sides in its history. Cameroon, who won their fifth continental crown last time and were originally set to host the competition, will face four-time winners Ghana. Benin and Guinea-Bissau complete the group.

Every draw contains a so-called 'group of death' and in this instance it is undoubtedly Group D with former champions Morocco, Ivory Coast and South Africa plus outsiders Namibia.

Senegal, the only one of the six top seeds never to have won the event, will face a former champion Algeria as well as the East African pair of Kenya and Tanzania in Group C.

Nigeria take on Guinea, Madagascar and Burundi in Group B. Tunisia face Mali, Mauritania and Angola in Group E.

The host put on a colourful show, though it strangely included an acrobatic troupe imported from Austria who performed dressed as African zebras.

Uganda coach Sebastien Desabre said: "Our chances in advancing will be tough because of the similar level of the teams in our group. It will be a difficult match-up facing the Pharaohs on their home turf amid their passionate fans."

"Facing Angola in the opening matches of the tournament will decide the fate of which team will top the group," he said.

French coach Herve Renard guided the Ivory Coast to a long-sought title in 2015 -- 23 years after they first conquered Africa -- and then switched to Morocco.

The countries clashed at the last Cup of Nations in Gabon with the Moroccans winning 1-0 to advance from the group stage and eliminate the Ivorians.

Charismatic Renard is the only coach to have won the competition with different countries as he guided outsiders Zambia to the 2012 title.

South Africa are unpredictable -- they began the qualifying campaign with a stunning 2-0 win in Nigeria but could only draw at home to Libya the next time they played.

A greater embarrassment for Bafana Bafana (The Boys) came when they were held 0-0 away by a Seychelles team of part-timers, including a hotel pastry chef.

Apart from Morocco, the other five top seeds will be confident of making the round-of-16, the first of four knockout stages.

Mohamed Salah-inspired Egypt should win Group A, leaving DR Congo, Uganda and Zimbabwe to scrap for one or two places.

Nigeria look superior in Group B to Guinea and two debutants, Madagascar and Burundi, while Senegal and Algeria should advance from Group C at the expense of Kenya and Tanzania.

Tunisia and Mali will be the favoured sides in Group E while Mauritania and Angola resume a rivalry from the qualifiers where both teams won at home.

It would be a shock if Cameroon or Ghana failed to make the second round as Benin and Guinea-Bissau appear to be among the weakest qualifiers.