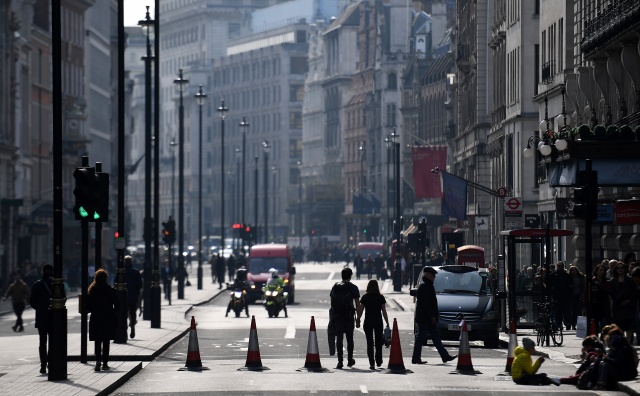 Pedestrians walk along a closed off Piccadilly in London on April 15, 2019, as environmental protestors from the Extinction Rebellion group demostrate in Piccadilly Circus. Environmental protesters from the Extinction Rebellion campaign group started a programme of demonstrations designed to block five of London's busiest and iconic locations to draw attention to what they see as the "Ecological and Climate Emergency" of climate change. (Daniel LEAL-OLIVAS / AFP)

(AFP) - Climate change protesters brought a bridge in London to a standstill on Monday and blocked major roads in the capital, kicking off days of planned civil disobedience events in cities around the world.

More than a thousand people blocked off Waterloo Bridge and laid out trees and potted plants along its length, in the protests organised by campaign group Extinction Rebellion.

Campaigners also daubed graffiti and smashed windows at the UK offices of energy giant Royal Dutch Shell, spraying the Extinction Rebellion logo on the walls along with "Shell kills", "shame" and "lies".

Police officers detained suspects at the building while demonstrators held up a banner reading "fossil fuels are killing us" and placards saying "wanted for ecocide".

Extinction Rebellion started in Britain five months ago with the aim of pressing governments and other institutions to declare a climate and ecological emergency.

They also want action to halt biodiversity loss, reduce greenhouse gas emissions to net zero by 2025 and be led by the decisions of new "citizens' assemblies on climate and ecological justice".

"The aim is to contribute to an escalating series of acts of civil disobedience which bring about change," said Larch Maxey, 46, a spokesman for the movement.

"The plan is disruption and that disruption escalates until you get the attention of the people you are persuading to change," he said.

On Waterloo Bridge, demonstrators held up placards reading "rebel for life", "we have no planet B" and "truth, disobey", set up a skateboard ramp and marched back and forth across the bridge behind a group of drummers.

People brought wheelbarrows with them and set up vegetarian food stalls, enjoying their lunch in the sunshine.

Many families with children took part in the demonstration.

Ruby Brookman, 22, a volunteer in helping refugees, said: "I'm here because our generation is going to be affected by this.

"I work with refugees and we saw people moving with climate change: drought in East Africa a while ago, the recent hurricanes in Zimbabwe."

Oliver Paines, 68, from Cornwall, was part of a group of people who stripped off in the public gallery of parliament's House of Commons on April 1.

"We are farmers. Twenty years ago we saw the way farming was industrialised, destroying and damaging human life with pesticides," he said.

"Every day, we see evidence of the planet in crisis."