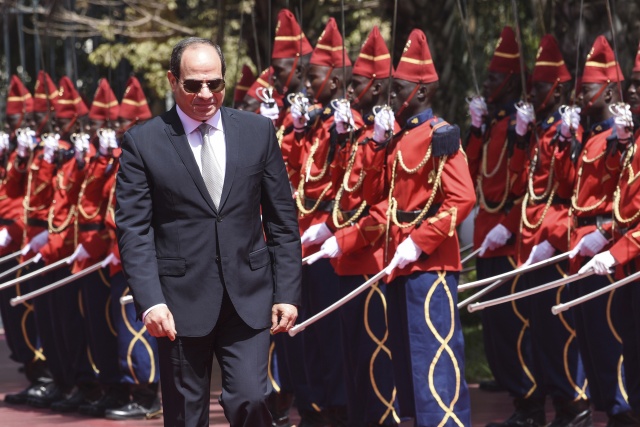 Egypt's President and current Chairperson of the African Union, Abdel Fattah al-Sisi, walks past a guard of honour upon his arrival at the Senegalese Presidential Palace in Dakar during an official visit on April 12, 2019. (SEYLLOU / AFP)

(AFP) - Members of Egypt's parliament on Tuesday approved changes to the constitution that will allow President Abdel Fattah al-Sisi to stay in power until 2030, state media reported.

The changes to extend presidential terms are part of amendments initially introduced in February by a parliamentary bloc supportive of Sisi and updated this week after several rounds of debates.

"The president's current term shall expire at the end of six years from the date of his election as president in 2018," reported the official Al-Ahram news website and broadcaster Nile TV.

"He can be re-elected for another (six-year) term."

MPs approved other sweeping changes to the constitution including allowing the military a greater influence in Egyptian political life as well as granting Sisi greater control over the judiciary.

"The final votes on all the amendments package have yet to be tallied," MP Mohamed Abu Hamed told AFP.

The amendments are expected to be put to a public referendum later this month.

Critics have slammed the amendments as "unconstitutional".

Egypt's parliament, which is packed with Sisi supporters, was elected in 2015.

A former military chief, Sisi became president in 2014, a year after having led the military ouster of Egypt's first freely-elected president, the Islamist Mohamed Morsi.

He was re-elected in 2018 with more than 97 percent of the vote, after standing virtually unopposed.

Under Sisi, Egypt has drawn wide international criticism for its sweeping crackdown on dissent including Morsi's Islamist supporters as well as secular and liberal activists.