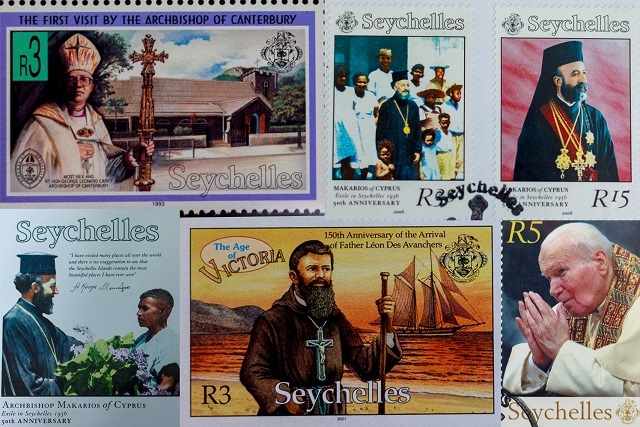 (Seychelles News Agency) - As Seychelles - a Christian country  - observes the holy week leading to Easter Sunday, SNA presents a buzz of Christian religious leaders who have been immortalised on stamps published by the island nation’s post office.

The leaders have all visited Seychelles – a group of 115 islands in the western Indian Ocean – since its discovery in 1742.

Pope John Paul II was the head of the Catholic Church and sovereign of the Vatican City State from 1978 to 2005. Born in Poland, John Paul II was the second longest-serving pope in modern history after Pope Pius IX, who served for nearly 32 years from 1846 to 1878. He was one of the most travelled world leaders in history, visiting 129 countries during his pontificate.

Pope John Paul II visited the Seychelles in December 1986, when he celebrated mass at the Popular Stadium in the capital city of Victoria, which was attended by thousands.

2. Archbishop Makarios III of the island of Cyprus, Greece

Archbishop Makarios III was a strong advocate for self-determination in Cyprus in the middle of the twentieth century. His activities gave the British authorities sufficient reason to exile him to Seychelles for a year.

During this period of banishment, he had a distinct impact on the people of Seychelles, an effect on the country’s relations with other involved nations, and developed a relationship with the people of the island.

Carey was the Archbishop of Canterbury from 1991 to 2002. During his time as archbishop of the Church of England, Carey ordained its first women priests and the debate over attitudes to homosexuality became more prominent, especially at the 1998 Lambeth Conference of Anglican bishops.

Archbishop Carey visited the Seychelles in 1993, as part of a tour of the region. Carey stayed at the residence of the British High Commissioner at Bel Air – a district on the outskirts of Victoria.

After celebrating mass at the International Centre of Seychelles, Carey accompanied by Seychellois Archbishop French Chang Him, left the main island on Mahe for Assumption where he boarded another plane to Tanzania for the continuation of his visit.

Lèon des Avanchers was a Capuchin priest of the Province of Savoy, France and is credited to have formally established the Catholic faith on the islands in March 1851. By 1853, the priest had already built a small wooden chapel in Victoria.