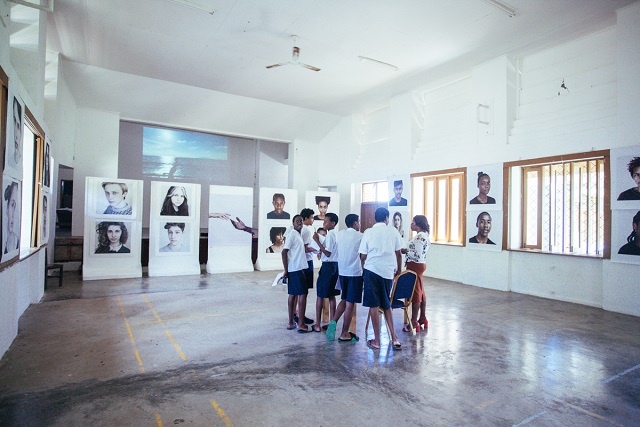 Eva Vradiy has captured the portraits of 12 Seychellois youths between the ages of 13 and 19 to put together chapter two of her project. (Eva Vradiy)

(Seychelles News Agency) - A Russian photographer living in Seychelles is running a project aimed at showing that adolescents from around the world all share the same thoughts and feelings despite the difference in look.

Seychelles is the second location after Crimea, a peninsula in Eastern Europe, in which the photographer, Eva Vradiy, did her project. She captured the portraits of 12 Seychellois youths between the ages of 13 and 19 to put together chapter two of her project.

Dubbed ‘The Youth of the Earth,’ the project is part of a research Vradiy is doing to prove the belief that, despite cultural, social and ethnic differences, humans are all quite similar. To accompany her photographs, Vradiy is also putting together video documentaries.

“We are the holders of unifying principals, namely love, desire, fears, dreams, and ideals. These features are not visible on the surface. However, they are always hidden inside us,” said 35-year-old Vradiy.

To showcase her work so far, Vradiy organised an exhibition on April 8 at the International Conference Centre of Seychelles (ICCS) in Victoria. The Seychellois teenagers who took part in the project were also present.

One of the participants, 17-year-old Nishant Velmurugan, told reporters of the Seychelles Broadcasting Corporation that taking part in the project has been a nice journey and has helped with his confidence.

“She was really nice and kind and produced beautiful shots. She asked me what is love, what problems do teenagers have these days, how does society affect our lives among other things,” said Velmurugan.

Another participant, Maybelle Rosalie, 18, said the project has “made a difference in my life especially when it comes to being photographed and being shy in general. Before the project, I was unable to make eye contact and Miss Eva has helped me overcome this.”

The exhibition was moved to the Mont Fleuri Secondary School from April 9 -11.

Vradiy said that adolescence is the time these individuals will be shaped into the adults they will later become.

“Teenagers have a choice and as adults, we can help them. It is our responsibility. Adults have so much power over the world of children and we must give them the best example,” said Vradiy.

The project started in 2015 when Vradiy created a festival called ‘I am Youth’ in Crimea. She said that since starting her career as a high school teacher, she started seeing adolescents in a different light.

“I remembered myself in this age as well as my thoughts, feelings and stresses,” said Vradiy.

Still seeing herself as a teenager at heart, the photographer explained that adolescence is an important time in a person’s life. She aims at drawing attention to this age group. Through the global idea of integration, Vradiy wishes that each young girl and boy is provided with the ability to show their personality as they enter the world of adulthood.

“Teenagers themselves represent a kind of bridge between childhood and maturity. This is a vulnerable age and how teens enter the world of adulthood depends a lot on us - the more experienced adults,” she said.

Looking towards the future and the continuation of the project, Vradiy said that the next country for her research in will most probably be China but she also wishes to do it in India and Italy. Each chapter will feature six girls and six boys.

Arts & Culture » Be a reporter: Write and send your article » Subscribe for news alert
Tags: Seychelles Broadcasting Corporation, The Youth of the Earth