Seychellois Mark Good Friday with prayers, chants during Way of the Cross procession 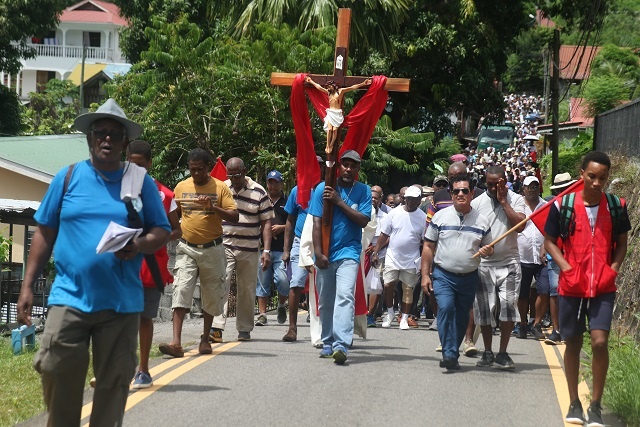 This year’s Way of the Cross procession went up Bel Eau road, the Revolution Avenue, Labourdonnais street, Hangard street and ended at the Cathedral of the Immaculate Conception. (Joe Laurence)

(Seychelles News Agency) - Hundreds of Christians all over Mahe, the main island, converged in the capital Victoria on Good Friday to commemorate the crucifixion and death of Jesus Christ at Calvary.

Believers walked while praying and chanting in the way of the cross procession which started at 9 a.m. at the Stad Popiler.

This year’s Way of the Cross procession went up Bel Eau road, the Revolution Avenue, Labourdonnais street, Hangard street and ended at the Cathedral of the Immaculate Conception at around 11.30 a.m.

Men, women and children of all ages took part in what has become a tradition for Roman Catholics in the 115-island archipelago in the western Indian Ocean.

The processions usually take place on the island nation's three main populated islands, Mahe, Praslin and La Digue on Friday, which is marked as a public holiday.

Speaking to SNA, Erica Francois from the western district of Port Glaud, who usually attends the procession in her district, said she came all the way down to the capital to pray along with a bigger crowd.

“It is my first time in Victoria. There are more people compared to the procession in my district. The journey has been long, with almost an uphill climb, but I do it for Jesus as this is nothing compared to what he endured,” said Francois.

Kenny Low-Hong, 36, who was accompanied by his two children, said he is very happy to participate in the way of the cross with his family.

“It is an act of sacrifice I make every year. I come to ask for guidance and blessing for my family,” said Low Hong.

As was the case last year, a special Way of the Cross procession was also organised for children who will be doing their Holy Communion and Holy Confirmation this year.

Shawn Uranie, who was participating in the special procession, said that “I am marching for little Jesus. My teacher told me that I had to come to be able to do my Holy Communion and Holy Confirmation.”

Believers who were more able to push themselves harder made the steep climb up the mountains of Trois Freres [three brothers], which overlook the capital.

For the majority of believers in Seychelles, the rest of the day is spent in prayer, fasting and church services, in preparation for the feast on Easter Sunday.

Easter is one of the most important Christian celebrations in Seychelles. The island nation has a population of around 93,000 and according to the National Bureau of Statistics 76 percent of the population is believed to be Roman Catholic, 6 percent Anglican, 2.4 percent Hindu, 1.6 percent Muslim, and the rest are of other faiths.

General » Be a reporter: Write and send your article » Subscribe for news alert
Tags: Jesus Christ at Calvary, Cathedral of the Immaculate Conception

Seychellois mark Good Friday with Way of the Cross walks