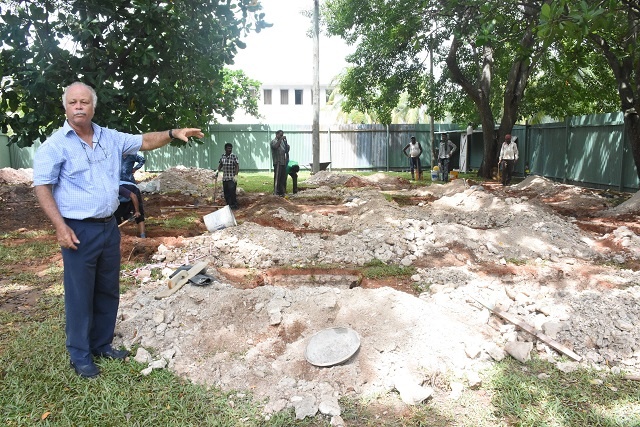 Andre said that after two years now the Mayor's office has finally been allocated a piece of land to start our project. (Louis Toussaint)

Adding a touch of live entertainment to Victoria – the capital city of the Seychelles - is the aim of a waterfront project that will be completed in four months, according to the mayor of Victoria.

Once completed, the waterfront project which will be located in the vicinity of the Marine Charter will provide Seychellois with a meeting point for live entertainment and a place to shop for local craft.

The mayor of Victoria, David Andre, told journalists last Wednesday that: "For so long now people have been complaining about the lack of activity and entertainment in Victoria."

Andre said that there are few options for families to get together in Victoria. “As one of my priorities I have asked the government for a place that can be developed and turned into an entertainment area,” explained the mayor.

“After two years now our office has finally been allocated a piece of land to start our project,” Andre said.

The mayor of Victoria added that since he came into office in January 2017, he has always wanted to see something in the capital that will make a difference in the life of the citizens and visitors.

The waterfront development will consist of a cafeteria and a stage that will provide space for local artists to perform.

As for other forms of entertainment, Andre said that the place will offer a beautiful musical ambiance. “By that, I am not talking about loud music, but those that offer a bit of relaxation,” he added.

The project will also include several kiosks that will be allocated to artists who want to display and sell their locally made artifacts.

The project is also bringing a new concept to the islands. “Everywhere in the world, there is a new tendency to develop what we call green cities. Instead of seeing big buildings and a lot of cars, we want to create and keep a green Victoria,” said Andre.

A plot of 1400 square metres has been allocated for the project, but only a part will be used for the development.

The waterfront project will cost approximately $74,000 and the government has allocated a sum of $37,000.

Once completed it is expected that the new feature will provide entertainment and activities throughout the week and weekends. Looking at the future, Andre said that as the mayor of Victoria it is in his plan to push for more projects of these sorts.

Tourism » Be a reporter: Write and send your article » Subscribe for news alert
Tags: Mayor of Victoria