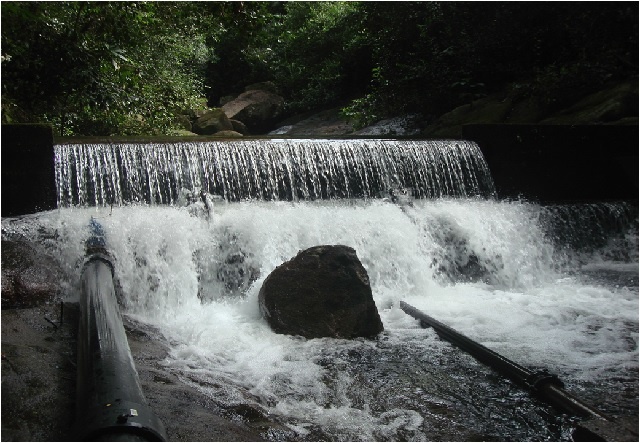 The Grand Anse dam will hold around 850,000 cubic metres of water, with a daily yield of 9,600 cubic metres. (Public Utilities Corporation)

(Seychelles News Agency) - The final feasibility report and detailed design of a new dam to be built in Grand Anse Mahe, a western Mahe district, is expected to be ready in January next year, said a project officer.

An Italian-based company, Studio Pietrangeli, specialising in dam and hydropower engineering and design has been conducting a comprehensive feasibility study at the site for the past four months.

The study was commissioned in 2017 by the company overseeing the project in Seychelles -- the Public Utilities Corporation (PUC).

The dam is a major part of Seychelles' major infrastructure initiatives. It will help the island nation with water security at a time of rising visits from tourists.

An Environment Impact Assessment (EIA) study has been conducted by local environment consultant, Eco-Sol, and on Saturday the findings were presented to the inhabitants of Grand Anse Mahe. The study looked at the social, economic and environmental impact the construction of the dam will have in the area.

The managing director for Water and Sewerage in the Public Utilities Corporation (PUC), Steve Mussard, said that as part of the project, it is mandatory to hold public meetings to inform residents about the scope of the project as well as its benefits.

“This is quite significant because today with a small treatment plant at Grand Anse Mahe, we are producing, 3,000 cubic metres per day. So the dam will greatly increase capacity for the entire western and southern regions,” he added.

Some concerns raised by inhabitants at Saturday’s meeting included noise pollution during the construction phase, destruction of biodiversity as the area will be flooded, and impact on economic activities such as agriculture.

As part of the Seychelles' water supply development 2030, the construction of a dam at Grand Anse Mahe has been the subject of discussion for a number of years.

This is the third major feasibility study for the construction of a dam in the Grand Anse Mahe district. The first study dates back to 1972, and the second one was commissioned in 1991 and undertaken by GIBB -- a Mauritius-based consultancy.

PUC has to complete a draft design and report by end of the year and a final document will be presented in January next year.

“Although we are referring to the GIBB report, we have to carry out a new study because of the time that has elapsed. We need to have a new geotechnical study to compare with past observations and findings and then finalize the report,” he added.

He says once this is done, the government will then seek financing for the construction.

President Danny Faure in his last State of the Nation address said that with the increase of the population and tourists coming to Seychelles, water consumption continues to rise. Faure said it was time to prioritise water security.

In 2017, PUC produced 14.6 billion litres of water and during the dry season, where rainfall is limited, the company compensates by producing more than one-third of water through desalination plants.

The construction of a dam in the district of Grand Anse Mahe is among six major capital projects considered to be important for the development of Seychelles, an archipelago in the western Indian Ocean.

Ecologically minded villas to be built in Seychelles' Grand Bois