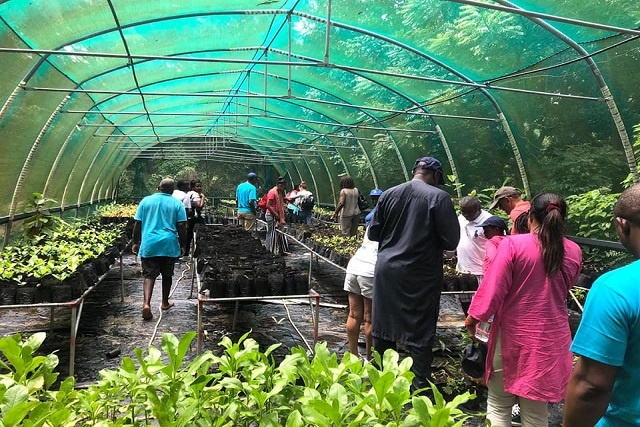 The organisation, which leads tree planting activities with the assistance of volunteers, is managing the biggest nursery in the country.  (Terrestrial Restoration Action Society of Seychelles/ Facebook)

(Seychelles News Agency) - A not for profit organisation in Seychelles that is celebrating its 10th anniversary this year is leading forest restoration efforts by producing 15,000 trees annually.

Terrestrial Restoration Action Society of Seychelles (TRASS), the only environmental not-for-profit based on the second-most populated island of Praslin, is committed to reforest areas affected by forest fires and land degradation.

The organisation, which leads tree planting activities with the assistance of volunteers, is managing the biggest nursery in the country. TRASS is also involved in rehabilitating mangrove forests and ensuring the conservation of wetlands.

Victorin Laboudallon – an environmentalist - who is a founding member of TRASS said the nursery at Fond B’Offay in the district of Grand Anse Praslin is producing around 12,000 to 15,000 endemic and indigenous plants every year.

“The granitic island of Praslin is severely degraded with noticeable scars of red top soil seen on most of its mountain peaks as a result of continuous erosion and repeated forest fires,” explained Laboudallon, who added that TRASS’ work got added support through a grant from the Japanese government in 2016.

Apart from planting trees and mangroves, TRASS is also conducting research. “We are also thinking of releasing a scientific paper as we are studying which types of trees do better where soil erosion has taken place,” said Laboudallon.

Laboudallon said that the organization works in close partnership with the Seychelles Agricultural Agency, where soil tests are made to ensure the success of plantings.

During April TRASS embarked on an ambitious plan to plant over 5,000 trees on the neighbouring island of Curieuse as part of the Ecosystem-based Adaptation-South project.

The project, which started in 2017, involves the production and planting of 30,000 plants which includes mangroves and other coastal plants on Praslin and Curieuse.  Curieuse Island - a national park, is the only other location apart from Praslin, where the endemic coco de mer grows in its natural state.

With the support of volunteers from both the public and private sectors the organization has achieved its target.

“We have been fortunate to have had the support of so many local groups, including work places, religious denominations as well as educational institutions which have not only participated but ensure the success of these plantings,” said Laboudallon.

Elvina Henriette, biodiversity consultant affiliated to TRASS, told SNA that the group has also started a project to rehabilitate the Fond Boffay watershed - one of the largest water catchments providing potable water to the communities on the island.

“The area is where the hills are bare and degraded and in need of being restored to ensure a continued and healthy water supply,” said Henriette.

Henriette added that future projects include the rehabilitation of other water catchments as well as the promotion of biodiversity-friendly sustainable forest and land management practices such as beekeeping, agroforestry and agro-tourism amongst local communities.