North Korea's Kim in Russia for first talks with Putin 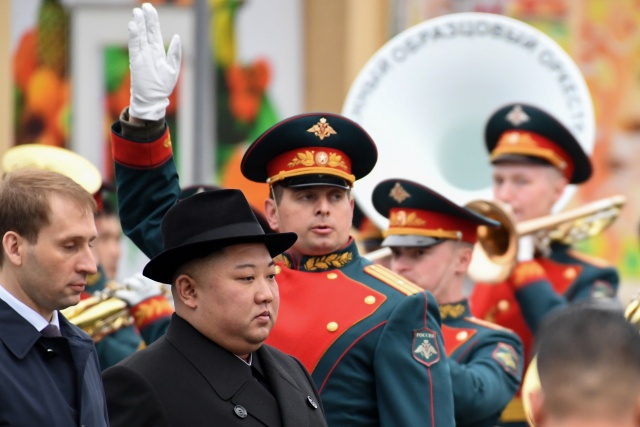 (AFP) - North Korean leader Kim Jong Un said he was looking forward to his first talks with President Vladimir Putin as he arrived in Russia on Wednesday seeking support in Pyongyang's nuclear deadlock with the United States.

Kim's armoured train rolled in to the Tsarist-era station in Russia's Pacific port city of Vladivostok, where the summit will take place on Thursday.

Wearing a long black coat and fedora, Kim stepped out onto a red carpet on the station platform before making his way outside where he was received by an honour guard and military band.

His limousine drove off after the ceremony, bodyguards in suits running alongside.

The talks, only confirmed at the last minute, will be Kim's first face-to-face meeting with another head of state since returning from his Hanoi summit with US President Donald Trump, which broke down in February without a deal on the North's nuclear arsenal.

"I hope this visit will be successful and useful," Kim told Russian television in the border town of Khasan, where women in folk costumes welcomed him with bread and salt in a traditional greeting.

"I hope that during the talks... I will be able to have concrete discussions on resolving situations on the Korean Peninsula and on the development of our bilateral relationship," Kim said.

Putin was due to arrive in Vladivostok on Thursday, then fly on after the talks for another summit in Beijing.

Russian and North Korean flags were flying on lamp posts on Vladivostok's Russky island, where the summit is expected to take place at a university campus.

The island is connected to the rest of Vladivostok by a bridge built in 2012 that crosses a harbour used for commercial and naval ships.

Kim plans to stay on in Vladivostok on Friday for a series of cultural events, including a ballet and a visit to the city's aquarium, Russian media reported.

The talks follow repeated invitations from Putin since Kim embarked on a series of diplomatic overtures last year.

Analysts say he is now looking for wider international support in his standoff with Washington, while Moscow is keen to inject itself into another global flashpoint.

The Kremlin has said the focus of the talks will be on finding "a political and diplomatic solution to the nuclear problem on the Korean Peninsula" but that no joint statement or signing of agreements was planned.

Kremlin spokesman Dmitry Peskov said Wednesday that the six-party talks on North Korea's nuclear programme -- launched in 2003 with the participation of North and South Korea, China, Japan, Russia and the United States -- remained the best option for finding solutions but that other efforts were worth looking at.

"There is currently no other effective international mechanism," Peskov told reporters.

"On the other hand... all efforts deserve support if they are really pursuing the goal of denuclearisation and resolving the problems of the two Koreas."

Moscow was a crucial backer of Pyongyang for decades and their ties go back to the founding of North Korea, when the Soviet Union installed Kim's grandfather Kim Il Sung as leader.

The Soviet Union reduced funding to the North as it began to seek reconciliation with Seoul in the 1980s, but Pyongyang was hit hard by its demise in 1991.

The first of those meetings was in Pyongyang in 2000, when Putin became the first Russian leader to visit the North.

China has since cemented its role as the isolated North's most important ally, its largest trading partner and crucial fuel supplier, and analysts say Kim could be looking to balance Beijing's influence.

"We believe this will contribute... to peace and stability on the peninsula and in the region," Geng said, noting that China and Russia "have always maintained close communication and coordination" on the issue.

While ties between Russia and North Korea have remained cordial, the last meeting between their leaders came in 2011, when Kim Jong Il told then-president Dmitry Medvedev that he was prepared to renounce nuclear testing.

His son has since overseen by far the country's most powerful blast to date, and the launch of missiles capable of reaching the entire US mainland.