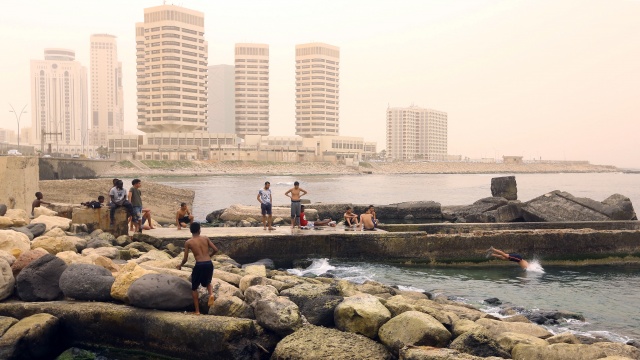 Libyans children gather on the beach near the main port of Tripoli, Libya on April 22, 2019. Despite the war on Tripoli's doorstep, residents are filling the salons and cafes in some quarters of the Libyan capital as they carry on with life as best they can. Tension has been high in Tripoli since military chief Khalifa Haftar launched an offensive on April 4, aimed at seizing the capital from the UN-backed unity government based there. (Mahmud TURKIA / AFP)

Speaking to French daily Liberation, Sarraj denounced Paris for backing a "dictator," in his harshest criticism yet of French diplomacy.

France has long been suspected of backing to Haftar, a former army field marshal based in eastern Libya, who heads the self-styled Libyan National Army (LNA) and has gradually expanded his territory.

On April 4, Haftar launched a drive towards Tripoli where Sarraj's UN-recognised government is based, triggering fighting that has claimed 264 lives and left more than 1,200 wounded.

"We are surprised that France does not support our government that is democratic, but supports a dictator," Sarraj told Liberation.

"When (French president) Emmanuel Macron called me, I warned him that public opinion was against France. We don't want Libyans to hate France. France still has a positive and important role to play," he said.

In a separate interview with the Le Monde newspaper on Monday, Sarraj said France was partly to blame for Haftar's offensive on Tripoli.

"The disproportional support from France towards Haftar is what made him decide to take action and abandon the political process," he said.

France publicly denies supporting Haftar, saying it has contact with all the actors in war-ravaged Libya where a complex mosaic of militias and political factions are competing for advantage.

France has long had links with Haftar, who was invited to Paris alongside Sarraj in 2017, in what was seen as an ambitious gamble by Macron shortly after he was elected president.

That marked the beginning of Haftar's appearance on the international stage and last year, he was invited back to a major peace conference of the various factions in Paris which helped legitimise him.

"The two invitations from President Macron completely changed the image and positioning of Haftar," Virginie Collombier, an academic specialising in Libya at the European University Institute in Florence, told AFP.

The strongman's bold move on Tripoli three weeks ago appeared to have taken the international community by surprise, but raised questions about possible French complicity -- an idea firmly dismissed by Paris.

"It was a big shock," said a diplomatic source at the foreign ministry, insisting France had "no prior knowledge" of the offensive.

Haftar's campaign began barely two weeks after French Foreign Minister Jean-Yves Le Drian met him in his eastern stronghold of Benghazi during a ministerial trip on which he also met Sarraj.

"In terms of image, this is a high-stakes affair for French diplomacy. It has given the impression in recent years of compromising with a dictator in the making," he wrote in a briefing note.

"This risky attitude could be justified if it facilitates a way of passing on messages to Marshall Haftar which stop the fighting."

Collombier from the European University Institute said France's proximity to Haftar meant it had "lost all credibility with some of the actors in Libya" and had also caused strains with EU partner Italy.

Rome has reacted with fury to what is perceived as a powergrab by Macron in Libya, a former Italian colony, diplomats say.

Speaking in Paris on Wednesday, Le Drian urged both Sarraj and Haftar to "stick to the agreement" reached in Abu Dhabi in February, referring to talks between them at which they agreed to work towards organising elections.

French diplomatic sources have previously raised concerns about Sarraj's apparent lack of influence and his alleged dependence on Islamist militias and the Muslim Brotherhood group.

He is backed by Qatar and Turkey, analysts say.

Haftar is increasingly seen by his allies, which include Russia and Egypt, as a bulwark against Islamists who gained a foothold after the 2011 uprising that ousted dictator Moamer Kadhafi.

Haftar won overt backing from US President Donald Trump last week too.

That came a day after Russia and the United States opposed a British bid at the UN Security Council, backed by France and Germany, to demand a ceasefire in Libya.