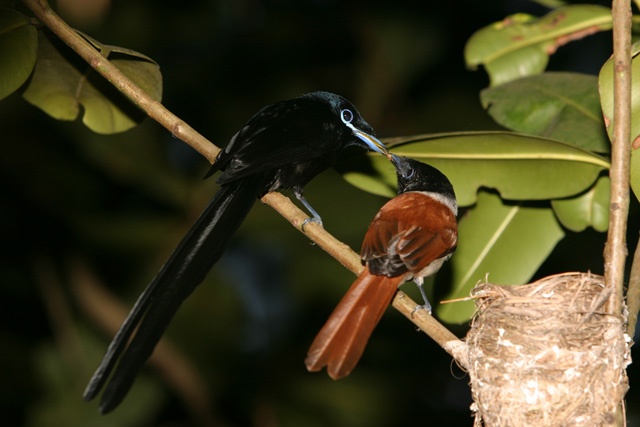 The paradise flycatchers are currently on the International Union for Conservation of Nature’s list of critically endangered species. (Jeff Watson, Nature Seychelles)

(Seychelles News Agency) - The discovery of a new nest of the Seychelles’ critically endangered bird, the paradise flycatcher, in an unusual tree is a positive sign that the species is recovering, said the Seychelles National Parks Authority (SNPA).

For the first time, a new nest built by a pair of paradise flycatchers, known as veuve, was spotted in a morinda citrifolia tree (bwa torti in Creole) which produces the noni fruit in the Veuve Special Reserve on La Digue, the third-most populated island.

According to SNPA ranger Josianna Rose, the discovery will have major ramifications for conservation practice of the paradise flycatcher.

“It’s a major positive since it widens the habitat potential for the veuve. We can now add more bwa torti in the reserve, and at about two metres from the ground level, they will be more accessible for us to monitor,” she said.

Flycatchers typically nest more commonly in takamaka and badamier trees which are seen in plenty in the Veuve Reserve’s coastal woodlands, as well as bwa kafoul and bwa blan.

Rose said that as the species is clawing back from the brink of extinction, nesting and breeding patterns have to be closely monitored to ensure the environment is as favourable as possible toward its recovery.

The paradise flycatchers found only in Seychelles, a group of 115 islands in the western Indian Ocean, are currently on the International Union for Conservation of Nature’s (IUCN) list of critically endangered species. This species has an extremely small range and probably only one viable population persisting on an island where there has been a continuing decline in habitat.

Rats and the destruction of habitat brought the species close to extinction until the creation of the Veuve Reserve in 1991 on La Digue. The Reserve was at one point the species last sanctuary. Careful monitoring, conservation practices and translocation to other islands -- Denis in 2008 and Curieuse 2018 -- have helped the bird to recover.

In an interview on the birds’ translocation to Curieuse last year, the director general for biodiversity conservation and management in the environment ministry, Marie-May Muzungaile said, “There is continuous stress on the species as their main habitat is on La Digue. It is not to our advantage to have the population only on one site. The first transfer was a learning process for us. Ten years on we feel that we are ready for the next step.”

Meanwhile, SNPA continues to improve the habitat of the paradise flycatchers in the reserve on La Digue.

“Just last month, a series of leaf-shaped bird baths were installed to provide additional water during the dry season. The last drought was tough on the birds and we had some fibreglass baths made,” Rose said.

The SNPA is also planning a major upgrade to the facilities at the Veuve Special Reserve, which will include a refurbished visitor information centre.

The Seychelles National Parks Authority is entrusted with the protection and management of all marine and terrestrial national parks in the island nation.

Species » Be a reporter: Write and send your article » Subscribe for news alert
Tags: Veuve Special Reserve, International Union for Conservation of Nature