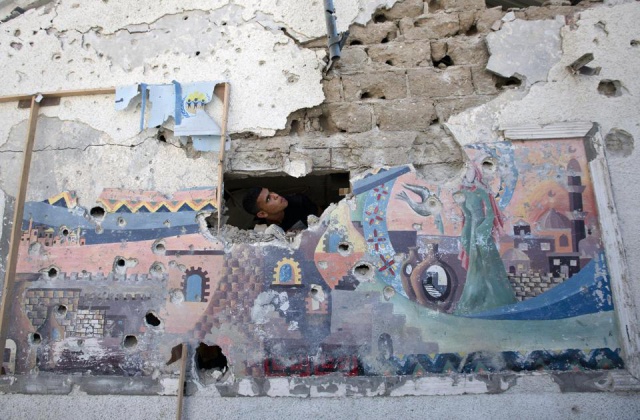 A Palestinian man inspects the damage at a UN school at the Jabalia refugee camp in the northern Gaza Strip after the area was hit by Israeli shelling on July 30, 2014 (AFP Photo/Mahmud Hams)

(Seychelles News Agency) - The Seychelles islands have condemned ‘in the strongest terms’ the loss of civilian life in Gaza and the attack against the UN school in Jabaliya, Gaza, according to a press statement on Friday from the islands’ foreign affairs ministry.

The school was hit by Israeli artillery, and 15 people, mostly children were killed, despite the fact that the United Nations Relief and Works Agency for Palestine Refugees in the Near East (UNRWA) had shared its coordinates with the Israeli army 17 times. The bombing is the sixth attack on a UN-run school in Gaza since Israel's Operation “Protective Edge” began on 8 July.

“The fact that over 1420 civilians in Gaza have lost their lives since the 8th July is unacceptable to Seychelles and all peace loving nations. The Seychelles government also urges the parties in the peace talks to respect an unconditional ceasefire,” reads the statement.

The Seychelles government says it emphasizes the importance of the United Nations as a means of upholding international law, and as a body representing all states, and that “Any military action that targets UN facilities represents an assault of the ideal of international law and cooperation and must be rejected in the strongest terms.”

Seychelles expressed its ‘wholehearted support’ for the UN Security Council resolution that calls for an immediate and unconditional ceasefire and reiterated the call for the leaders involved to ‘respect this UN decision.’

“Seychelles also associates itself with the SADC statement condemning the escalation of attacks and loss of life as well as the resolution of the UN Human Rights Council  calling for respect for the sanctity of human life and the protection of civilian populations in the conflict.”

Today fighting in Gaza continues as a humanitarian ceasefire collapsed on Friday some hours after it began, with the UN Secretary General Ban Ki Moon laying blame on Hamas for breaking the truce by capturing an Israeli soldier.

"Our initial indications suggest a soldier has been abducted by terrorists in an incident where terrorists breached the ceasefire," Israeli army spokesman Lieutenant Colonel Peter Lerner told AFP.

He said a suicide bomber blew himself up, adding that first reports "indicate that a soldier was seized".

According to the Daily Mail, the Al Qassam Brigades, the military wing of Hamas, said the soldier had not been taken after the ceasefire.

In a statement on Twitter, it said: 'There is no justification for Israel to violate the truce as the officer was captured and two soldiers were killed before the truce.'

Friday's short ceasefire gave a brief breathing space to people in the Gaza, where 1,600 Palestinians, mostly civilians, have died and 63 Israeli soldiers and three Israeli civilians have died, according to AFP.

The UN Human Rights Council has set up a commission of inquiry to investigate violations of international law in this conflict.