Back to Basics – Miss Seychelles 2014 getting families to live healthily 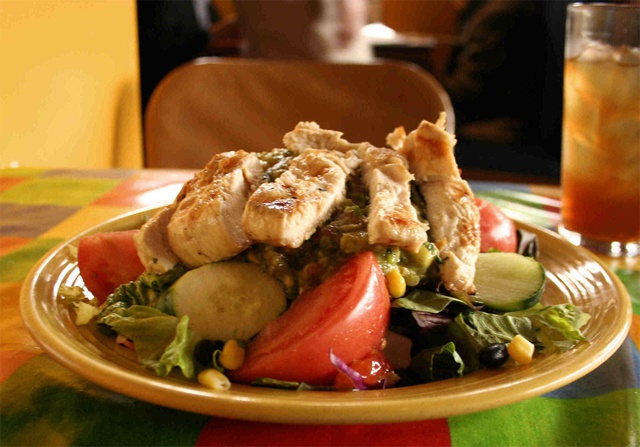 Plate of food 12 April 2006 (Elvert Barnes/Flickr) The four families who embark on Camila's project will be monitored in terms of the portion sizes for each family member (…) guided on what and when to eat and do regular medical check-ups, as well as body weight updates. Photo License:(CC BY 2.0)

(Seychelles News Agency) - Getting four Seychellois families to adopt healthier lifestyle and eating habits, that is what Miss Seychelles, Another World 2014, Camila Estico is aiming to achieve through her project – ‘Back to Basics’ which she launched on Wednesday at the Berjaya Beau Vallon Bay Hotel, in the northern part of the Seychelles main island of Mahé.

This is Camila’s ‘Beauty with a Purpose project’ which she is working on in preparation for the Miss World Beauty Pageant in London, in November.

In the beginning ‘Back to Basics’ was to focus mainly on school children.

Camila explained when launching her project that after much consideration she realised that children cannot feed themselves and need the support of the parents, hence the reason she decided it would be better to target the whole family.

Obesity a concern for Seychelles

Obesity is in fact a major concern in Seychelles as the island nation has seen an increase in the number of people who are overweight.

According to WHO released figures last year reported by UK's daily mail, Seychelles is ranked 18th in terms of countries with the most people who are overweight, with an estimated 60.1 percent of the Seychelles population of around 90, 000 considered to be overweight.

According to the figures Samoa topped the list with an estimated 94 percent of its population considered obese.

Earlier this year the archipelago’s Ministry of Health took the first step to try and tackle the situation by introducing a new Food Act which was approved by the National Assembly replacing the one dating back to 1987.

The Ministry of Health noted that the new law is modern as it takes into account the changes that have occurred since 1987 in the way food is handled, transported and also the types of food being sold on the market.

It makes provision for a person importing foodstuff for the local market to seek permission from a competent local authority, which in this case is the Public Health Authority in a bid to ensure that there are healthier products on the market as well as properly labelled goods.

Camila's project is targeting to embark 4 families ideally consisting of up to 4 persons on a 15 week journey.

One of the four families selected will be coming from Praslin, Seychelles’ second main populated island.

During the 15 weeks, the four families all facing the problem of obesity will work with lifestyle consultant and nutritionist from South Africa Kirschlee Naidoo who is helping Camila to carry out her project.

Naidoo explained that they are not planning to introduce any crazy diets instead they will promote the use of local organic resources which are abundant in Seychelles, such as fresh fish.  A list of food will be given to the families.

Kirschlee said that they will “..monitor the portion sizes for each family member (…) guide them on what and when to eat and do regular medical check-ups, as well as body weight updates.”

By doing this the families will be expected to lose between ½ to 1kg per week. Every four weeks body weight assessments will be done and from then, there may be adjustments.

“In the beginning the families will be encouraged to walk, however exercise will be brought into the programme as from the 8th week so as not to disrupt their lives too much in the first phases. This will be according to the individuals’ medical ability and age. Children will also be encouraged to start a sport,” explained Naidoo.

Local telecommunications company Airtel as well as various supermarkets are supporting this initiative by providing food to the families who will be on the 15 week programme.

The Seychelles beauty queen has already selected the first family to take part in her project and is calling on other families who are interested to take part in this healthy living project to contact the Events and Conferencing department at the Seychelles Tourism Board so that she can select the remaining three.

The Seychelles Minister for Tourism who was present at the launching of Camila’s project along with the islands’ Tourism Board CEO Sherin Naiken and other tourism officials, as well as Camila’s family and friends commended the initiative aimed at promoting healthy living.

St Ange said he hopes that the project can bring new meaning to the phrase “eating with a purpose” instead of eating for the sake of eating.

Camila and her entourage is hoping that the project will in turn create a domino effect and inspire other people to do the same.

It was on June 01 that Camila was crowned Miss Seychelles Another World 2014 at the newly opened Savoy Resort and Spa in the Northern district of Beau Vallon, on the main Seychelles island of Mahé.