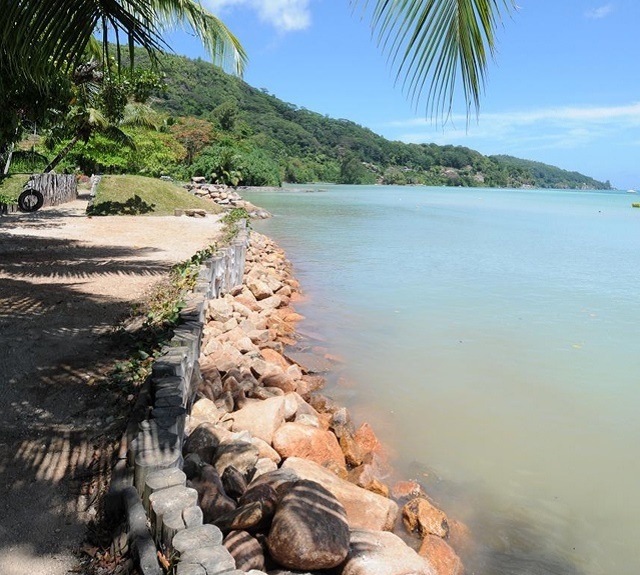 The rehabilitated coastline at Anse La Mouche through a 3-year project after it was subjected to degradation and erosion. (Patrick Joubert)

(Seychelles News Agency) - The inclusion of marine and coastal ecosystem-based adaptation into Seychelles’ climate change strategies was the topic of discussion by local experts who met recently.

Romy Chevalier, a senior researcher at the SAIIA said, "To date, the link between marine and coastal ecosystems and their role in climate adaptation is not always very strong or apparent and there are opportunities here.”

“In the Seychelles it is better than some of the other countries we are reviewing, but there is still room to lobby for the inclusion of EbA within the climate change strategy of the Seychelles and also within its Nationally Determined Contribution (national climate change strategy) and blue economy strategies,” added Chevalier, who was facilitating the one day session at the Eden Bleu hotel.

“In terms of the workshop, it is important for us to get buy-in from a local and diverse audience, assess whether there are suggestions to add in terms of specific policy recommendations, and also to hear the on-the-ground perspectives of local organisations and ensure that all voices are incorporated into the final draft reports,” said Chevalier.

According to the senior researcher, “there are also many experiences in the application of EbA that are relevant for others in the Seychelles, as well as for other countries. These recommendations will be shared through the other country workshops.” Chevalier revealed that similar workshops will be held in Tanzania, Mozambique and South Africa.

Jude Bijoux – a Seychellois marine biologist – said Seychelles, a group 115 islands in the western Indian Ocean, is in the process of drafting a Seychelles Climate Change Policy to provide the general framework for climate change adaptation and mitigation.

“For now, the Seychelles National Climate Change Strategy of 2009 remains the main national document addressing climate change adaptation. The EbA approach is firmly rooted in this strategy through one of its supporting principles, which states that ecosystem-based adaptation needs to be further developed to decrease Seychelles’ vulnerability to climate change’,” said Bijoux.

However, Bijoux noted that capacity building to address climate change adaptation remains a major concern for the island nation and is required at all levels – from developing expertise in implementing EbA in the field, to integrating EbA into the policy and legal framework.

The workshop was organized in collaboration with GAEA Seychelles – a local not for profit group – a citizen and science-based organisation. Its mission is to encourage and enhance local people to become more engaged in environmental activities and environmental management of conservation and to make a difference in their lives where it matters.