After pirate attack off Somalia, judge orders that 5 suspects are held in Seychelles 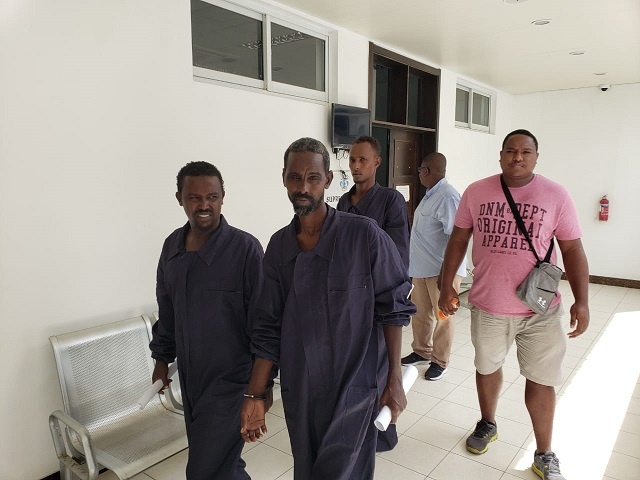 Only three out of the five Somali suspects appeared in court on Monday while the other two are receiving medical assistance. (Rassin Vannier)

(Seychelles News Agency) - Three out of five suspected pirates from Somalia who were transferred to Seychelles by EU NAVFOR last week were remanded until May 13 by the Supreme Court on Monday.

The EU NAVFOR Somalia Operation Atalanta transferred the five suspects to Seychellois authorities after responding to piracy attacks on 21 April 2019, the local Department of Foreign Affairs said on Saturday.

The suspects were transported by Spanish flagship ESPS Navarra and transferred to Seychellois authorities in accordance with a transfer agreement between the Seychelles and the European Union with support from UN Office on Drugs and Crime (UNODC).

Only three out of the five Somali suspects appeared in court on Monday while the other two are receiving medical assistance after they were injured in the piracy attacks.

For humanitarian reasons, Operation Atalanta requested medical assistance from the Seychelles authorities for two of the suspects likely to have been wounded during the piracy attempts.

The case is being heard by Justice Laura Pillay, who remanded the suspects until May 13.

During the court session on Monday, a request was made for appropriate clothes for the detainees and a place for prayer as they are all Muslims.

The forces said that this is the first notable piracy incident event since October of last year.

“This incident clearly demonstrates that piracy and armed robbery at sea, off the coast of Somalia, has not been eradicated,” said operation commander Rear Admiral Antonio Martorell.

He added that “the need for a strong maritime security presence in the High-Risk Area remains critical for the deterrence and prevention of future incidents and attacks.”