One Seychelles, the island nation's newest political party, seeks to give all members a voice 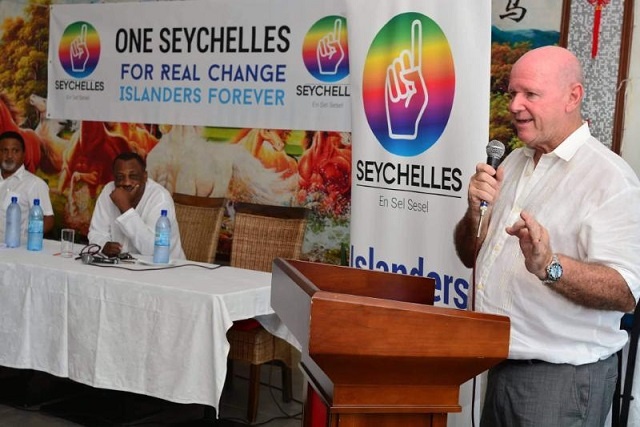 St Ange, the party's leader, told SNA that the name ‘One Seychelles’ stands for a unified Seychelles, focused on safeguarding the island nation and where everyone’s ideas and contributions are taken into account and given due consideration for the betterment of the country.

“We have named this new political party 'One Seychelles' because it is to push the point that we have only one Seychelles and the time has come to do away with the 'with us' or 'not with us' policy that has been destroying our country,” said St Ange.

He added that “this policy is worse today than ever before, resulting with so many capable Seychellois not being able to do their share to keep Seychelles on the road of success and in so doing earn a decent living for themselves and their family.”

The party also presented its five-point action plan which focuses on reviving the island’s economy, help create job opportunities and transform the lives of the people.

One Seychelles also hopes to narrow the gap between the haves and the have not and to ensure that no Seychellois is living below the poverty line.

A 2013 study by the Seychelles National Bureau of Statistics put the poverty rate at 40 percent with a poverty line of SCR 3,945 per month, equivalent to roughly $300 per month or $10 per day.

One Seychelles has called for a revision in the government salary scale to do away with the lower salary bands to ensure that employees in the lower cadres get a more acceptable salary.

The party said it will also focus on reducing the cost of living and kickstart the business community by reducing bureaucracy and taxes, as well as push for a culture of respect for both Seychelles and its people.

“This will put an end to the separation of our islands for the benefit of foreign military powers,” said One Seychelles, whose leaders have been actively protesting against the proposed military base on Assumption island.

The other office bearers of the party were officially presented at the launching.

The party’s secretary general is Peter Sinon -- the former executive director of the African Development Bank. Sinon was also the Seychelles’ High Commissioner to South Africa and Namibia and former Seychelles’ minister between 2010 and January 2015.