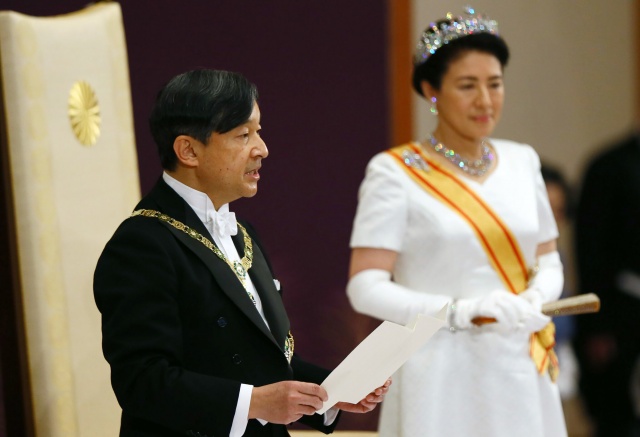 Japan’s new Emperor Naruhito (L) delivers his speech as new Empress Masako (R) stands next to him during a ceremony to receive the first audience after the accession to the throne at the Matsu-no-Ma state room inside the Imperial Palace in Tokyo on May 1, 2019. Japan's new Emperor Naruhito formally ascended the Chrysanthemum Throne on May 1, a day after his father abdicated from the world's oldest monarchy and ushered in a new imperial era. (STR / Japan Pool / AFP)

(AFP) - Japan's new Emperor Naruhito pledged Wednesday to stand by the Japanese people as he formally ascended the Chrysanthemum Throne, the day after his father's historic abdication ushered in a new imperial era.

It was the first time in more than 200 years that a member of the world's oldest royal family has chosen to step down, and solemn rituals accompanied both Akihito's abdication and Naruhito's enthronement.

Naruhito officially became emperor at midnight, when the country also began the new imperial era of Reiwa or "beautiful harmony", but the transition was formalised in a Wednesday ceremony.

The ritual, off-limits to all royal women, saw 59-year-old Naruhito accept the regalia relinquished by his father a day earlier: a sacred sword and jewel as well as the seal of the state and the imperial seal.

Naruhito then delivered his first address to the nation, vowing to "act according to the Constitution" while "always turning my thoughts to the people and standing with them".

The new monarch wore formal Western clothing including a heavy gold chain of office during the ceremony and his speech. He was joined by Empress Masako, wearing a long white gown and diamond-studded tiara, for his address.

The nation's 126th emperor said he would "reflect deeply" on the example set by his popular father Akihito, and that assuming the throne filled him with a "sense of solemnity".

Prime Minister Shinzo Abe, replying on behalf of the people, said: "We are determined to create a bright future for a proud Japan filled with peace and hope at a time when the international situation is changing dramatically."

After heavy rain dampened celebrations for the abdication on Tuesday, Japanese took advantage of sunnier weather to flock to the Meiji Shrine in the heart of the capital, where free sake was served ahead of a display of horseback archery.

Others watched the ceremonies and speech, which were conducted behind closed doors at the palace, on big screens outside Shinjuku, the world's busiest station.

"I am someone who loves history and what we are experiencing now will be talked about for a long time," 21-year-old law student Mito Okuno told AFP.

"That's why I wanted to come in person," added Okuno, resplendent in a striped kimono, who came some 600 kilometres (370 miles) from the town of Himeji to experience the moment.

Naruhito will make his first public appearance on Saturday when he will again address the people of Japan.

But the real pomp and ceremony will wait until October 22 when he and Masako will appear in elaborate traditional robes for a palace ceremony before parading through the streets of Tokyo to be congratulated by a host of world leaders and royals.

Naruhito will greet his first foreign head of state as emperor later this month, when US President Donald Trump visits Japan to meet the new monarch.

His father will move out of the palace later this year and now assumes the title Emperor Emeritus.

The Oxford-educated Naruhito faces the delicate balancing act of continuing his father's legacy of bringing the monarchy closer to the people while upholding the centuries-old traditions of the Chrysanthemum Throne.

Like his popular father, he has warned of the need to remember World War II "correctly", without downplaying Japan's early 20th-century militarism.

He has suggested the royal family should modernise, and vowed when he married Masako -- who left behind a promising diplomatic career -- to protect her "at any cost".

She has struggled with palace life, including being subjected to enormous pressure to produce a male heir, and has suffered stress-induced "adjustment disorder" for much of their marriage.

The couple have one child, a 17-year-old daughter called Aiko, who cannot inherit the throne because she is female.

In a statement released on her birthday in December, Masako pledged to do her best despite feeling "insecure" about becoming empress.

In the candid statement, she said she was recovering and could "perform more duties than before", crediting the "powerful support" of the public.

Naruhito is ascending the throne in a very different Japan to the one his father took over when he became emperor in 1989.

Then, Japan ruled the world economically, its technology was the envy of every industrialised nation, and its stock market was at highs unlikely to be matched again.

But following a "lost decade" after the bubble burst, the country is locked in a battle against deflation and sluggish growth while its population ages rapidly.

Akihito's abdication, the first in 200 years, has resulted in an unprecedented 10-day public holiday for the famously hard-working Japanese, with many taking advantage of the break to travel.

General » Be a reporter: Write and send your article » Subscribe for news alert
Tags: Japan, royals