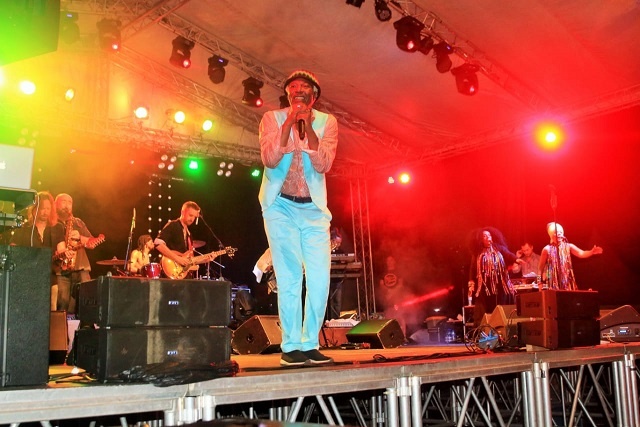 (Seychelles News Agency) - Several hundreds of reggae fans in Seychelles converged at the Mini Stadium in Victoria on Tuesday evening for a concert by popular Ivorian artist Alpha Blondy and his band The Solar System.

Fans danced energetically during the 90-minute show, which showcased some of the artist’s popular hits dating back to the beginning of his career in the early 1980s as well as songs from his last album -- Human Race -- released last year.

Ahead of the show, Blondy had promised fans a night to remember and said that “each concert for me is important and I consider it like my first. I don’t like to disappoint my fans so tonight I am going to give my best as always.”

Fans were not disappointed with the evening’s repertoire.

The song ‘Brigadier Sabari’ which talks about police brutality against him in the 1980s was on the list. Other well-known tracks such as Cocody Rock, Sebe Alla, Multipartisme, No Brain No Headache, Peace in Liberia, Jerusalem and Blondy’s rendition of Pink Floyd’s -Wish You Were Here’ were also performed at the concert.

Born Seydou Kone in Ivory Coast in 1953, the 66-year-old is renowned for singing songs that are politically and socially motivated, thus earning him the title Bob Marley of Africa -- after Jamaica’s reggae legend.

SNA spoke to some of the fans after the show, who said Blondy delivered although they would have preferred a longer show with some more popular songs.

Gerard, 50, who did not give his surname, said he grew up listening to Alpha Blondy’s songs. “I love that he sings in different languages and he is a singer with some powerful lyrics about life and love. He should have performed more songs but I understand the time constraint and I’m generally satisfied with what he gave us tonight."

Patrick Charlette said the show was very interesting despite not hearing his favourite song. “I wanted to hear ‘Je Vous Demande Pardon’. It’s a pity he didn’t sing it the song is a popular tune but I’m happy that I am here tonight.”

Alpha Blondy and his band were in Seychelles, a group of 115 islands in the western Indian Ocean, at the invitation of Veuve Entertainment – a local company.

The company’s director, Wilson Nancy, said he was extremely happy with the massive turnout and that logistically everything went smoothly with the technicians delivering quality sound and light for the show.

However, he was disappointed that fans could not take photos with the star after the concert.

Nancy said he will now await feedback from the fans to decide if, when and which artist his company would invest in bringing to Seychelles.

“We need to understand that most international artists send their riders which stipulate 90 minutes-show as the norm hence we got 90 minutes of pumping tunes back to back. Also, tickets for these artists normally cost in the region of $80 to $100. Offering Seychellois tickets at SCR250 ($18) is a bargain that even tourists are surprised. In general, I am overly satisfied with logistics and the hospitality of the Seychellois people,” concluded Nancy.

Blondy is now heading to France where he has a number of shows lined up for the summer.