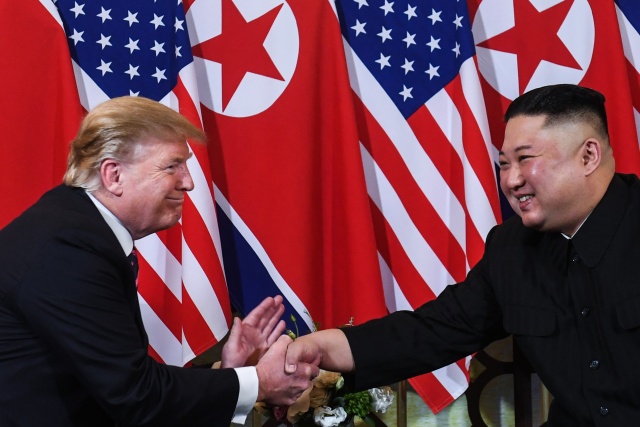 (FILES) In this file photo taken on February 27, 2019, US President Donald Trump (L) shakes hands with North Korea's leader Kim Jong Un following a meeting in Hanoi. Trump voiced confidence on May 4, 2019, that North Korea's Kim Jong Un would not "break his promise," after South Korea said Pyongyang had launched several unidentified projectiles into the sea. "Anything in this very interesting world is possible, but I believe that Kim Jong Un fully realizes the great economic potential of North Korea, & will do nothing to interfere or end it," Trump tweeted.
(Saul LOEB / AFP)

The North last carried out a missile test in November 2017, before a rapid diplomatic rapprochement saw tensions ease on the peninsula and a series of summits.

A return to missile launches would be likely to infuriate US President Donald Trump, but the North's official KCNA news agency shied away from the term in its report, saying Kim had ordered a "strike drill" involving "long-range multiple rocket launchers" -- which are not targeted by UN sanctions resolutions -- and unspecified "tactical guided weapons".

Seoul's military described the weapons as "projectiles" after it detected Saturday's firing.

The United States and North Korea have been at loggerheads since the collapse of a Trump-Kim summit in February, when the two sides clashed over sanctions and the extent of Pyongyang's concessions on its atomic arsenal.

But despite the latest sabre-rattling from Pyongyang, Trump insisted that a breakthrough was possible.

"Kim Jong Un fully realizes the great economic potential of North Korea, & will do nothing to interfere or end it," Trump tweeted.

"He also knows that I am with him & does not want to break his promise to me. Deal will happen!"

The US leader did not elaborate on Kim's promise.

During Saturday's drill Kim urged his troops to remember "the iron truth that genuine peace and security are ensured and guaranteed only by powerful strength", KCNA said.

The state-run Rodong Sinmun newspaper on Sunday carried 16 photos of the weapons test on its front page, including a picture of a grim-looking Kim clutching his binoculars in an observation post as well as several images of projectiles shooting skywards.

Trump proclaimed that the North Korean nuclear threat was over after the two sides' historic first summit in Singapore in June, when Kim pledged to work towards "complete denuclearisation of the Korean peninsula".

The two have since disagreed over what that means, but Trump has insisted the leaders remain close even after their follow-up meeting in Vietnam broke up without a deal or even a joint statement, and that Kim would maintain his moratorium on long-range missile and nuclear tests.

But with negotiations lagging, the North appears to be testing the US while staying below that threshold.

"Kim wants to ensure the world knows it is upset with the US hardline stance on denuclearisation and will not bow to external pressure," said Scott Seaman of the Eurasia Group.

But Ankit Panda of the Federation of American Scientists stressed that the projectile launch "does not violate Kim Jong Un's self-imposed missile-testing moratorium", which "only applied to intercontinental-range ballistic missiles".

Even so, a statement from Seoul's presidential Blue House said it was "greatly concerned," calling it a violation of a military agreement signed by both Koreas last year.

On Friday, South Korean Foreign Minister Kang Kyung-wha said Pyongyang should show "visible, concrete and substantial" denuclearisation action if it wants sanctions relief -- the issue at the centre of the Hanoi debacle.

Earlier this week, North Korean Vice Foreign Minister Choe Son Hui warned Washington of an "unwanted outcome" if it did not adjust its stance on economic sanctions.

Since the collapse of the Hanoi summit, South Korean president Moon Jae-in -- who brokered the first meeting between the mercurial US and North Korean leaders -- has tried to salvage diplomacy, but Pyongyang has remained largely unresponsive.

Last week, on the anniversary of the first Panmunjom summit between Moon and Kim, KCNA said Washington and Seoul "keep pushing the situation of the Korean peninsula and the region to an undesirable phase", criticising their joint military exercises.

The North Korean drill comes just days before US special representative Stephen Biegun is to visit Japan and South Korea for talks on Pyongyang's nuclear arsenal.

General » Be a reporter: Write and send your article » Subscribe for news alert
Tags: NKorea, SKorea, US