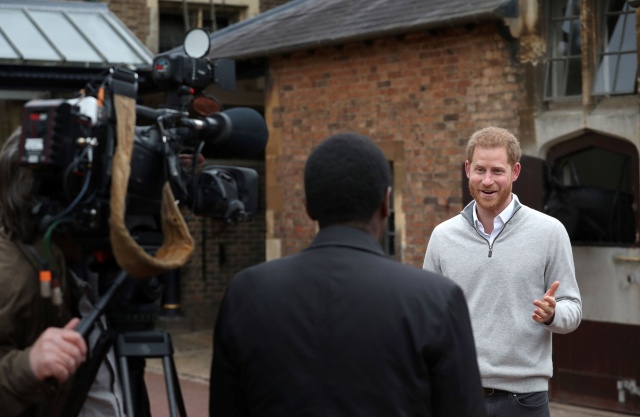 Britain's Prince Harry, Duke of Sussex, speaks to members of the media at Windsor Castle in Windsor, west of London on May 6, 2019, following the announcement that his wife, Britain's Meghan, Duchess of Sussex has given birth to a son. Meghan Markle, the Duchess of Sussex, gave birth on Monday to a "very healthy" boy, Prince Harry announced. "We're delighted to announce that Meghan and myself had a baby boy early this morning -- a very healthy boy," a beaming Prince Harry said.
(Steve Parsons / POOL / AFP)

(AFP) - Meghan, the Duchess of Sussex, has given birth to a boy, her "over the moon" husband Prince Harry revealed to the world on Monday in a low-key announcement intended to protect their privacy.

Prince Harry said that both mother and baby were "doing incredibly well" as he gave a short statement to British television news outlets, without either in sight, in front of Windsor Castle's horse stables.

"I am very excited to announce that Meghan and myself had a little boy early this morning -- a very healthy boy," a beaming Harry said in the video statement.

"As every father and parent would ever say, your baby is absolutely amazing.

"But this little thing is absolutely to die for. So I am just over the moon."

Meghan, who is mixed race, was an actress in the United States before marrying Harry last year at Windsor Castle.

The women's rights campaigner has been hailed as a breath of fresh air in a stuffy institution.

A royal spokesman did not reveal whether 34-year-old prince and Meghan, 37, opted for a home birth at their new Frogmore Cottage home on the royal family's Windsor Estate, west of London, or went to a nearby hospital.

The birth in Windsor breaks with the tradition followed by Harry's brother William and his wife Kate, whose three children were all born at St Mary's Hospital in London.

Harry and William were also born in the same hospital.

Harry and Meghan wanted to keep the arrival of their first child "private", Buckingham Palace said last month, and the announcement was made some nine hours after the birth.

That contrasts with William and Kate, whose three children -- Prince George, 5, Princess Charlotte, 4, and Prince Louis, 1 -- were immediately shown off to the world's media.

Prince Harry said Monday he expected to introduce the newborn to the nation -- and announce his name -- "in probably two days time".

Queen Elizabeth II, Prince Charles and Prince William were among the royals informed, as were the sisters and brother of Harry's late mother Diana, a royal statement said.

Meghan's mother Doria Ragland is with her daughter at Frogmore Cottage and was "overjoyed by the arrival of her first grandchild," it said.

Downing Street added to the well-wishes as news of the royal birth broke Monday afternoon in Britain.

"Congratulations to the Duke and Duchess of Sussex on the arrival of their baby boy," Prime Minister Theresa May said on Twitter. "Wishing you all the best at this happy time."

The BT Tower in central London scrolled a message of congratulations, while the London Eye will later turn red, white and blue in honour of the birth.

Justin Welby, the Archbishop of Canterbury who married the couple last May, also shared his joy on social media.

"May God bless the new family with love, health and happiness," he said.

Prince Harry and Meghan revealed they were expecting their first baby in October, at the outset of a 16-day tour of Australia, New Zealand, Fiji and Tonga.

Commentators believed the baby, the Queen's eighth great-grandchild, was due in late April and Britons have been on tenterhooks when the month ended without news of the birth.

There was fevered speculation in recent weeks over everything from the newborn's gender and name -- to whether it will have Harry's ginger hair.

The prince said the couple were still thinking about names.

Names including Arthur, James and Albert are now hotly tipped by British bookmakers to be chosen by the couple.

Prince Harry was present for the birth, describing it as "the most amazing experience I can ever possibly imagine".

"How any woman can do what they do is beyond comprehension," he said. "I am so incredibly proud of my wife."

Despite the understated nature of Monday's announcement, some royal enthusiasts gathered in Windsor and at Buckingham Palace, where a framed notice of the birth went on display on a ceremonial easel placed on the forecourt.

"I'm very excited," Amanda told AFP. "It would have been nice if it wasn't so discreet," she added.