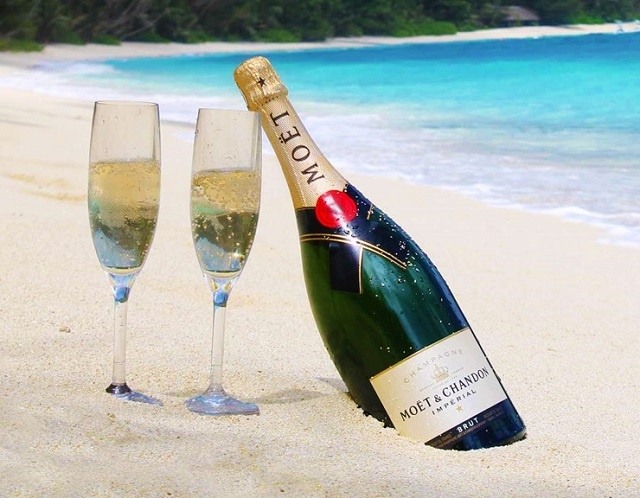 (Seychelles News Agency) - The festive mood that the sea and sand bring also makes people in Seychelles -- mostly its happy vacationers, actually -- more likely to consume a bit of the bubbly.

Seychelles consumes more champagne per person than any other country in Africa, according to a report published last month by a French organisation ‘Comite Interprofessional du Vin de Champagne’ (CIVC).

The consumption of Seychelles per person is at 350 bottles per 1,000 inhabitants -- or about a third of a bottle per person per year -- putting the archipelago in the western Indian Ocean top of the list in Africa.

A neighbouring island nation, Mauritius, is second with 93 bottles per capita with Gabon third with 66 bottles per 1,000 inhabitants.

The corporate relations manager of Seychelles-based East Indies company, Michael Saldanha, said, “We have recorded a spike in champagne sales over the last three years nationally, compared to our usual trends.”

The company said that the champagne Moët & Chandon is the most popular in the Indian Ocean region.

The wines and spirits wholesale and retail company founded in 2008 sells to numerous outlets across the main island of Mahe.

A large percentage of their sales go to hotel establishments.

“Up to 60 percent of our orders are wholesale for many different hotels. This suggests the high consumption is not necessarily in residents but rather for tourism and for events,” Saldanha told SNA.

Drinking champagne is a must in several events organised by tourism establishment.

These include the “Champagne Hour” by Kempinski Seychelles Resort, “Champagne a la Villa” at the Banyan Tree and the use of champagne in various spa treatments at the Hilton Labriz on Silhouette Island.

Bernard Hoareau, the wholesale manager of the Cave a Vin outlet said that while residents prefer other wines and spirits for retail purchase in their stores, champagne sales are more popular for events and special occasions.

The Comite Interprofessional du Vin de Champagne (CIVC) was established in 1941 as a co-operative organisation joining both growers and traders with regulatory powers supported by the French Government.