Opposition leader of Seychelles gearing up for presidential run next year 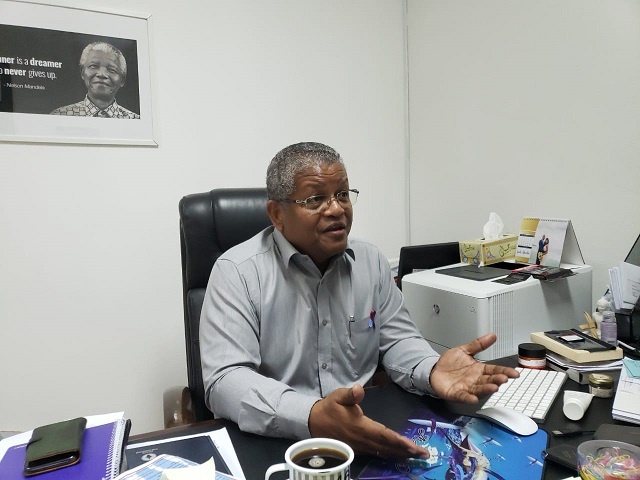 Wavel Ramkalawan, the leader of the opposition in the National Assembly has announced his intention to be a candidate in the election in 2020. (Rassin Vannier)

(Seychelles News Agency) - As Seychelles gets ready for a presidential election next year, SNA will be seeking the views of the island nation's political leaders.

The first interview is with the opposition leader in the National Assembly, Wavel Ramkalawan, who has announced his intention to be a candidate in the election in 2020.

SNA:  You’ve already announced your intention to stand as a candidate in next year’s presidential elections. When will this be made official?

WR: Yes, I have announced my intention. There is a convention scheduled in September and I believe the executive council will probably make an official announcement then to announce the process to choose a candidate.

I believe it could be like the format that was used for the Anse Boileau by-election in 2018, where everybody who was interested was asked to present themselves and from there, those present chose their candidates. It was the person with the most votes who stood for the party. The process was very democratic and it worked and I have a feeling this could be adopted for the Presidential Elections in 2020. I am definitely presenting myself as a potential candidate.

SNA: Have you already identified who will be your vice president?

WR: I have given this much thought. I need to choose a competent person with whom I can work. Without hesitation, I can say that at the moment the ideal candidate for the post is Honourable Ahmed Afif. We have a strong working relationship and he has a strong grasp of the economy, which is highly important. He also has a calm demeanour, very professional and a vision to work for the betterment of Seychelles. I believe that his heart is in the right place for Seychelles.

Of course, the team will include many other potential LDS (Linyon Demokratik Seselwa) candidates who I feel have the competence and ability to help rebuild Seychelles. However, one thing I want to stress on is that it is important that we not only look at people who are affiliated with the party. If we want to rebuild Seychelles, we need to look at every Seychellois.

I believe in a united Seychelles, where regardless of your political views, your responsibility should be first and foremost towards Seychelles and its development. I cannot stress this enough.

SNA: One year before the presidential elections, with different opposition parties in the country, do you foresee a united opposition like in 2015 and has this negotiation started?

WR: We need to be clear about one thing. The people who are creating their own political party, they do not identify with the opposition with the aim of removing Mr Faure and his government from power. These people are targeting me as the opposition leader and are fighting against me.

In our case, as LDS our goal is to challenge the ruling party, United Seychelles and remove it from power. Those leaders are saying that they don’t want any party to win a majority of 50 percent votes so that they can become the kingmaker and from there we won’t have a choice but to talk to them to form the next government.

This is not politics. In politics, you need to have principles. If you declare yourself an opposition party you need to show that you have something different from the government’s party.

Opposition parties always have something in common and when we identify this common factor, that’s when we start talking. That is what happened in 2015. We started talking with the other political parties in the opposition very early on. We agreed to run separately to test out strength and once we had to go in the second round of the presidential elections, all the parties were on board because we had one common goal and that was to remove the ruling party.

But today some opposition parties see Wavel Ramkalawan as the enemy. It’s as if I’m the elected president at State House.

SNA: Do you think this will make things more difficult for LDS?

WR: Not really. In fact, I believe it might make things easier for our party. I have noticed that the political terrain has evolved since the last election. You have fervent former Parti Lepep/United Seychelles supporters who have joined our camp and some spoke openly at our recent rally last month.

When you look at the new opposition party that was launched recently, I can say with confidence that their two leaders did not vote for me in the last elections as they were campaigning for the former Parti Lepep. So I did not get their votes then and will definitely not be getting their votes at the next elections. However, what it means is that since they have their own party now, the ruling party will be short of supporters. So the way things are going their votes might affect United Seychelles and thus play in our favour.

SNA: LDS recently voted to quash the Supplementary Instrument (S.I) presented by the government? Do you still stand by that decision?

WR: Throughout the debate on the matter, we (LDS) have maintained our position that we are in favour of an increase in salaries for all public service employees. We want the government to share the 62 million rupees budgeted, equally. Some people argued that they work more and that their scope of work is different. We totally understand that but we’ve asked every individual to make a small sacrifice as a country and to share this money equally so as to help those on lower salary bands.

When the government stopped talking to us, I was the one who contacted Mr Faure to request a meeting. According to our calculation, 80 percent of the workers stand to benefit from this increase, which in fact should be 66 million rupees and not what the technicians had proposed initially. Following our meeting, Mr Faure set up a technical committee and there again we maintained our position on the matter.

It is unfortunate that on the day he announced the setting up of the committee, he filed a case against the Speaker of the National Assembly to question the legality of the National Assembly’s decision to quash an SI on the matter. This shows a bad intention on his part. President Faure petitioned the Supreme Court to take the case as a matter of urgency, yet, the case which was scheduled last week had to be postponed as one of his two lawyers was sick.

In another twist, we see Mr Faure contradicting himself. He has announced that an increase in the national minimum wage by SCR500 in 2020. We maintain our position that the money budgeted should be shared equally among all public service employees.

SNA: Do you feel the disagreement has affected the relationship between the legislative and the executive branches of government?

WR: I believe the Speaker was affected by what happened. He had always maintained a cordial relationship with State House. I think President Faure did not act in good faith in many instances. Take for example when he wrote to the Speaker regarding the Public Service Salary bill. He could have informed the Speaker of his intention to issue a press release seeing the matter was of national importance. Instead, he went straight to the press without any consultation with the office of the Speaker.

Secondly, the case against filed against Speaker Nicolas Prea, was not made public. I think it was in bad faith on his part. Another instance was the Public Service Salary Amendment Bill 2019. This was tabled before the National Assembly and then withdrawn and replaced with an SI. I think State House went about this the wrong way and we maintained our position and went with what was presented initially and quashed the SI.

SNA: Does this situation affect the cohabitation and makes the relationship between legislative and executive more difficult?

WR: In LDS we take decisions in the interest of the country. We cannot play politics when it involves something that concerns the country. The issue of salaries and the cost of living concern everyone in the country. So in these instances, we expect the government to sit with us and talk seeing that there are different opinions and views. However, what we saw was a government not willing to talk but rather imposed an SI on us and sought legal recourse without any consultation whatsoever.

In the past, we have shown that we are always willing to talk and negotiate especially when it is in the country’s interest. We’ve had bills in the past that had to be amended and yet we voted in favour of those bills. When something is in the national interest, I will encourage the members to vote in favour.

SNA:  Are you still meeting with President Faure on a regular basis like was the case at the beginning of the cohabitation.

WR: No. But if I request a meeting, then he agrees to meet with me like was the case for the Public Service Salary revision. But the regular meetings are not taking place.

SNA: Do you think this is because the presidential election is around the corner?

WR: I believe this is a political move. I definitely know that Mr Faure is watching my moves just as I am watching his. For example this year you see more people being invited to State House to meet with Mr Faure and all of these events are covered in the media. We might dispute their newsworthiness. I am doing a lot of things behind the scene as well but I do not parade in front of the camera.

Mr Faure has recently made some announcements on the occasion of Labour Day on May 1st which I feel have some political element to it. All these announcements have budgetary implications. The government will be presenting its 2020 budget in November, so why not wait and let the Minister for Finance announce those measures. It’s political and I believe Mr Faure is still deciding whether to stand as a candidate or not.

Editor's Note: The order of the questions have been reorganised in print for topicality reasons.

The Interview » Be a reporter: Write and send your article » Subscribe for news alert
Tags: National Assembly, Linyon Demokratik Seselwa