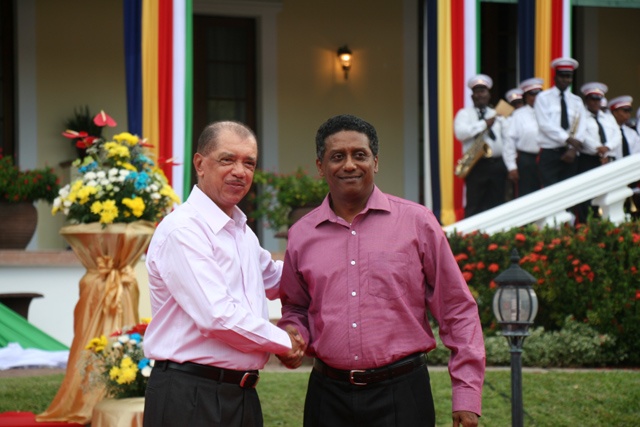 (Seychelles News Agency) - President Danny Faure and former President James Michel of Seychelles have been nominated as recipients of National Geographic’s prestigious ‘Planetary Leadership Award,’ which will be awarded next month in Washington D.C.

The announcement was made by the James Michel Foundation in a press communique on Tuesday.

The Planetary Leadership Award recognises a world leader who has successfully established globally significant protected areas, such as national parks, wilderness areas, or marine reserves, that are fully shielded from exploitation.

In announcing the award, the National Geographic said that only 15 percent of the land around the world and 7 percent of the world’s ocean are part of officially protected areas, while the planet’s critical natural systems are increasingly under attack due to the accelerating impact of human activity and development.

“The bold actions of informed and inspired global leaders are vital to building a better future for our planet,” added National Geographic.

National Geographic describes Michel as a “keen advocate for the cause of small islands developing states, the preservation of the environment, the Blue Economy and marine protected areas.”

It was during Michel’s presidency that Seychelles reached a major debt buyback agreement worth $30 million with the Paris Club group of creditors and South Africa in the French capital in February 2015. In the buyback, the debt was to be transferred to a trust which will conserve the Indian Ocean archipelago of 115 islands’ ocean spaces.

The former president of Seychelles, an archipelago in the western Indian Ocean, who heads the James Michel Foundation, is also recognised as one of the pioneers of the Blue Economy.

In 2015, during his presidency, he established a Blue Economy Research Institute in association with the University of Seychelles. Soon after, the Seychelles’ government embarked on plans for a roadmap for the Blue Economy, with support from the Commonwealth Secretariat.

Last month, Michel was admitted as a full member of the World Leadership Alliance Club de Madrid, in recognition of the role he has played and the contributions he has made in Seychelles and on the international scene.

Michel was also appointed as a founding member of the Pew Bertarelli Ocean Ambassadors in October last year on the sidelines of the ‘Our Ocean Conference' in Bali, Indonesia.