South Africans head to polls tipped to be won by ANC 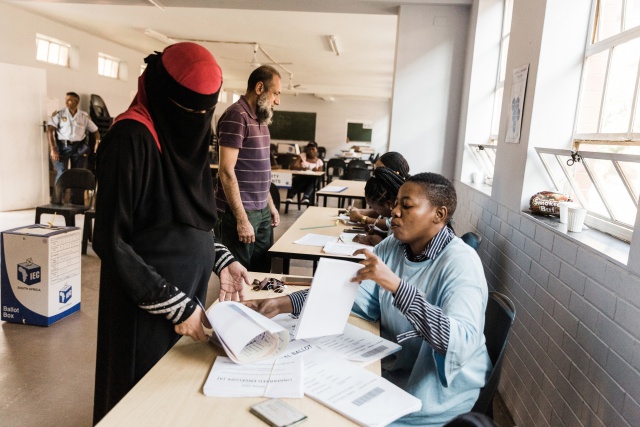 Muslim voters arrive to cast their vote on May 7, 2019, on the second day of the special vote ahead of South Africa's May 8th general elections. The special vote allows a registered voter who can't vote at their voting station on election day to apply to vote on a predetermined day before election day. (Rajesh JANTILAL / AFP)

(AFP) - South Africans go to the polls on Wednesday in national elections which the ruling ANC party, in power since 1994, is the favourite to win despite corruption scandals and sluggish economic growth and record unemployment.

The ANC has won all the past five elections, but Wednesday's vote is set to be an electoral test on whether the party has staunched a decline in popularity.

The party is tipped to win the vote, but with a reduced majority and the result will reveal whether its new leader, President Cyril Ramaphosa, can reverse growing resentment among South African voters.

Ramaphosa took over from scandal-tainted Jacob Zuma, under whose leadership the ANC saw the most significant drop in support since 1994.

He acknowledged on the eve of the election that "we are humble enough to admit our mistakes. We have taken decisive steps to fight corruption."

The election comes 25 years since Mandela led the African National Congress (ANC) to power in the country's first multi-racial ballot, which marked the globally-celebrated end of apartheid rule.

Support for the ANC has fallen in every election since 2004 with the party winning just 54 percent in 2016 local elections, compared with 62 percent in the last national vote in 2014.

Ramaphosa, 66, took office last year when Zuma was forced to resign as president by the ANC after a nine-year reign dominated by corruption allegations and economic woes.

Most opinion surveys suggest the ANC will secure nearly 60 percent of the vote on Wednesday, thanks to the Ramaphosa effect and a weak and fragmented opposition.

"The ANC will pull another majority. It might be a reduced majority," said political scientist Collette Schulz-Herzenberg from Stellenbosch University.

"It reflects the weakness of the opposition, more than it does reflect the achievements of the ANC," she added.

The pro-business moderate Ramaphosa is a former anti-apartheid activist and trade union leader who was Mandela's apparent favourite to succeed him as president.

After being outmanoeuvred in that race, Ramaphosa instead became a wealthy entrepreneur before serving as Zuma's vice president.

The ANC has been confronted by deepening public anger over its failure to tackle poverty and inequality in post-apartheid South Africa.

The economy grew just 0.8 percent in 2018 and unemployment hovers at a high of nearly 27 percent, rising over 50 percent among young people.

"In a normal country the ANC should be losing the election on the 8th (of May)," said University of Witwatersrand senior lecturer Lumkile Mondi.

Of the 47 opposition parties in the race, only the main opposition centrist Democratic Alliance (DA) and the radical-left Economic Freedom Fighters (EFF) are major players.

The DA which hopes to shed its image as a white, middle-class party as its first black leader, Mmusi Maimane, fights in his first general election since he took the helm in 2015, is expected to make marginal gains from the 22 percent it won 2014.

But the radical leftist EFF, founded just six years ago by a former ANC youth leader Julius Malema, is predicted to make major inroads, growing from 6.3 percent to a forecast 11 percent.

The party, which appeals mainly to young voters and the poor, has centred its election campaign on its policy of seizing land from largely white owners to give to poor blacks.

Enforced land redistribution has also been adopted as a policy by Ramaphosa's government -- alarming some investors.

Wednesday's provincial elections will also measure ANC fortunes, with the party in a close fight with the DA for control of Gauteng, which includes the capital Pretoria and the economic hub Johannesburg.

Some 26.8 million voters are registered to cast ballots at 22,925 polling stations.

Early results will emerge on Thursday with an official winner declared on Saturday.

The party that wins most seats in parliament selects the president, who will be sworn in on May 25.