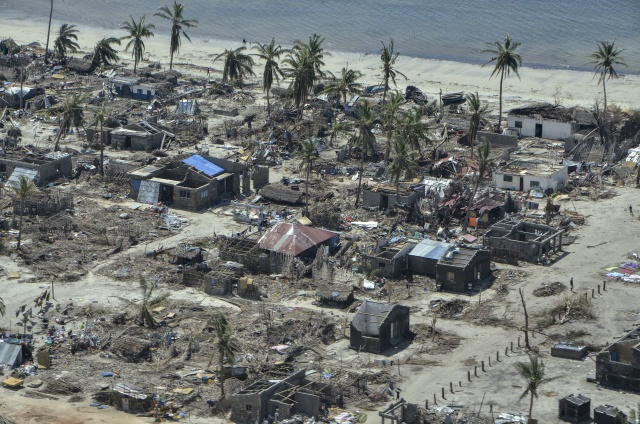 This picture taken on May 1, 2019 shows an aerial view of the damaged Ibo island after the passage of the cyclone Kenneth, the first to hit Mozambique's north in the modern era. From the air, Ibo island on the Quirimbas Archipelago off Mozambique's northeast coast, was speckled with flattened homes and water-logged farmland, testament to the destructive force of Cyclone Kenneth. Cyclone Kenneth killed at least 41 people and destroyed thousands of homes across northern Mozambique. Ibo was particularly hard hit. (Emidio Jozine / AFP)

(AFP) - The World Bank will extend more than half-a-billion dollars in grants for cyclone-ravaged southern African countries, its chief announced Friday as he concluded a visit to Mozambique, the worst affected country.

A total of up to $545 million will be disbursed to Mozambique, Zimbabwe and Malawi -- the three countries hit by Cyclone Idai in March.

"And this tragedy has been compounded by Cyclone Kenneth," another cyclone that hit Mozambique six weeks later.

Cyclone Idai devastated the port city of Beira and its surrounding areas when it hit on March 14, causing huge floods and killing more than 600 people.

Mozambique, which received $350 million of the grant, will use the funds to rebuild water supply systems and damaged public infrastructure, among other things.

Part of the funds will also go towards disease prevention programmes in affected areas in and around Beira, where nearly 5,000 people have been infected with cholera, resulting in four deaths.

Malawi, which suffered floods before the storm made landfall, will get $120 million for agriculture and infrastructure.