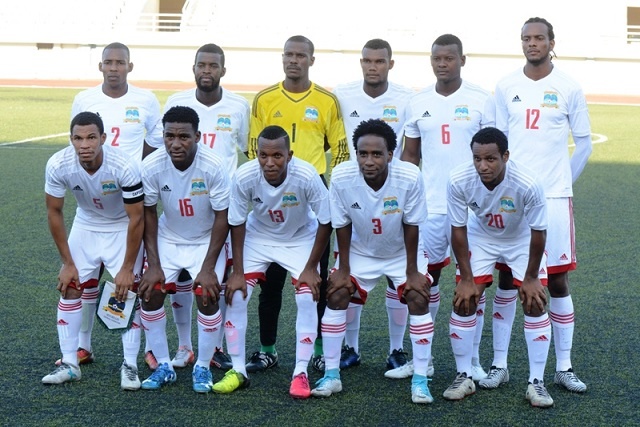 The Seychelles team which played against Swaziland in an international friendly match in March 2018. (Seychelles Nation)

The Seychelles Pirates will go into the match with a two-goal deficit after losing to the south-western African side nicknamed ‘The Zebras’ in the leg match last month.

Coach Gavin Jeanne told SNA that after losing 2-0 the second leg match will be complicated for his side.

“It will be complicated for us because while we will have to try not to concede any more goals since we are already behind we will at the same time have to try and score,” he said.

Jeanne said another problem he has encountered is regarding the preparation of the team for the match.

“It’s going to be a tough match because Botswana is fully prepared while on our side, I have not really been able to work with the full team because of release difficulties. Which is why in the away match we wanted to score at least one goal to give us a better advantage but that did not happen,” Gavin told SNA.

Jeanne will be making some slight changes to the squad for the Saturday’s match.

“We will have players who were not able to make the trip to Botswana while some players will be absent because of injuries.”

Meanwhile, Seychelles has been drawn once again in the same group as Mozambique in the Council of Southern Africa Football Associations (Cosafa) tournament in Durban, South Africa scheduled for May 25 to June 8.

The Seychelles Pirates are in Group B which includes Mozambique, Namibia and Malawi.

The side from Seychelles, an archipelago in the western Indian Ocean, had a chance at moving to the next round last year after two draws -- 1-1 against Comoros and 1-1 against Madagascar.

In their third match, the Seychelles Pirates needed a victory to progress but lost 2-1 against Mozambique.

All 14 members of the Cosafa are competing in the annual tournament. The first week of the competition will be the group stage where each team plays three games in their pools.

The format of the game is that after the group stage, six teams are eliminated. Another six top-seeded teams come in for the quarter-final stage and these will be defending champion Zimbabwe, last year’s runner-up Zambia, host country South Africa, Uganda, Botswana and Lesotho.

The Seychelles’ men’s national team has been competing in the Cosafa cup since 2005.