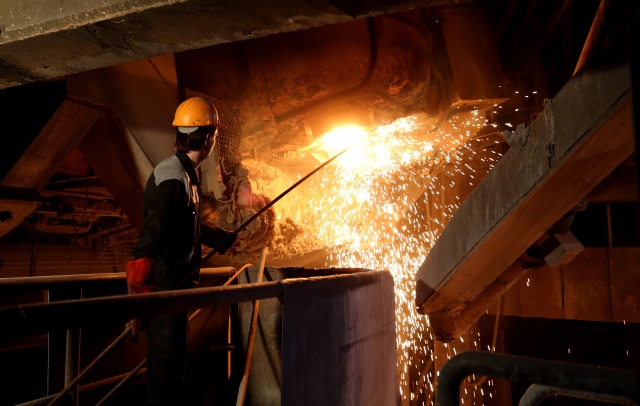 FILES) In this file photo taken on April 06, 2015, an employee works at the Iran Alloy Steel Company's plant in the central Iranian city of Yazd. US President Donald Trump on May 8, 2019, announced sanctions against Iran's steel and mining sectors, hours after Tehran said it would suspend some curbs under a denuclearization deal rejected by Washington. The White House said it was targeting the country's biggest revenue source after oil and warned in a statement: "Tehran can expect further actions unless it fundamentally alters its conduct." (Atta KENARE / AFP)

(AFP) - European powers Thursday denounced Tehran's threat to resume nuclear work, drawing a sharp response from the Iranian foreign minister who accused them of caving in to US bullying.

The three European signatories to the 2015 Iran nuclear deal urged the Islamic republic to stick to its commitments after it said it would stop respecting some limits imposed by the agreement.

They rejected an ultimatum from President Hassan Rouhani, who threatened to go further if they fail to deliver sanctions relief within 60 days to counterbalance US President Donald Trump's assault on the Iranian economy.

EU diplomatic chief Federica Mogherini and France, Germany and Britain -- the three European nations in the deal -- voiced "great concern" over Rouhani's intervention, which came on the anniversary of Trump's withdrawal of the United States from the agreement negotiated under his predecessor Barack Obama.

"We strongly urge Iran to continue to implement its commitments under the JCPOA in full as it has done until now and to refrain from any escalatory steps," they said in a joint statement, referring to the Joint Comprehensive Plan of Action as the deal is known.

"We reject any ultimatums and we will assess Iran's compliance on the basis of Iran's performance regarding its nuclear-related commitments under the JCPOA."

"EU statement today is why JCPOA is where it is: the US has bullied Europe -- and rest of world -- for a year and EU can only express 'regret'," Zarif tweeted.

"Instead of demanding that Iran unilaterally abide by a multilateral accord, EU should uphold obligations," he said, calling for the "normalization of economic ties."

Tensions have soared between Iran and the United States, which has announced the deployment of an aircraft carrier strike group and nuclear-capable bombers to the region, saying it had information of Iranian-backed plots.

"The regime in Tehran should understand that any attacks by them or their proxies of any identity against US interests or citizens will be answered with a swift and decisive US response," Secretary of State Mike Pompeo said in the latest stern US warning.

But with Trump's Democratic rivals accusing him of pushing towards conflict on hyped-up intelligence, Pompeo also said, "We do not seek war."

And Trump -- who threatened to destroy North Korea before sitting down with its leader Kim Jong Un for two landmark summits -- said he was open to face-to-face negotiations.

"We don't want them to have nuclear weapons -- not much to ask," he said.

Few observers expect any talks soon between Trump and Iran's leaders, for whom hostility toward the United States is a bedrock principle of the 1979 Islamic Revolution that toppled the pro-Western shah.

Trump, a close ally of Iran's rivals Saudi Arabia and Israel, has vowed "maximum pressure" to roll back Tehran's influence in the region. Trump on Wednesday moved to end all of Iran's steel and mining exports after already mobilizing to slap sanctions on all countries that buy its key money-maker of oil.

Europe has stressed the importance of the deal -- in which Iran agreed to curb its nuclear ambitions in return for sanctions relief -- for its own security, and EU leaders discussed the crisis at their summit in the Romanian town of Sibiu.

French President Emmanuel Macron appealed for calm, saying Europe must work to persuade Iran to stick with the deal.

"We must not get jumpy or fall into escalation," Macron said, warning that leaving the deal would "unstitch what we have achieved".

"That's why France is staying in, and will stay in and I profoundly hope Iran will stay in," Macron said as he arrived for an EU summit in Romania.

Russia, another signatory to the deal along with China, on Thursday denounced the latest US sanctions and said it understood why Iran had decided to suspend some of its commitments -- but urged Tehran not to go further.

Since the US pullout, Europe has sought to keep Iran in the deal by trying to maintain trade via a special mechanism called INSTEX to clear payments without falling foul of American sanctions.

The European statement reiterated its commitment to "enable the continuation of legitimate trade with Iran".

But few major European companies want to risk the wrath of US sanctions for the sake of the Iranian market and the country's supreme leader, Ayatollah Ali Khamenei, has dismissed the European efforts as a "bitter joke".