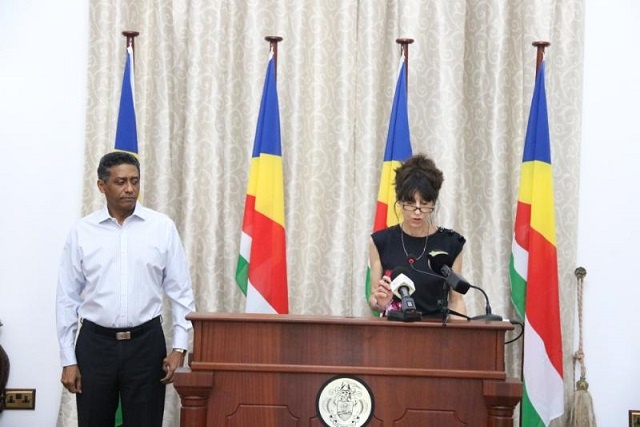 (Seychelles News Agency) - The members of the newly set up Truth, Reconciliation and National Unity commission in Seychelles were sworn in at State House in Victoria on Thursday.

The commission which was set up last year following the approval of the National Assembly will provide the public with the opportunity to settle past political divisions and grievances that began with the 1977 coup d’état.

In his opening remarks at the ceremony, Attorney General Frank Ally noted that the work of the Commission’s is to create national unity rather than to start a witch hunt and that meetings they hold will be opened to the public as and when necessary.

The appointments of the members followed recommendations made by the Constitutional Appointment Authority in Seychelles after receiving applications from interested parties.

Australian lawyer Gabrielle Louise McIntyre, who was appointed by the Seychelles’ President, Danny Faure, is the chairperson of the commission.

Speaking to the press, McIntyre said, “I am not from here and I have no vested interest in any of the outcomes so this means I will be objective in my decision making.”

“This is usually why Commissions will appoint foreign chairpersons or commissioners, to ensure that the person has no personal interests in any way and for a small place like Seychelles this makes sense,” she added.

McIntyre is a leading legal expert on international criminal law procedure and the International Humanitarian Law (IHL). She has contributed as a transitional justice expert in countries such as Rwanda, Kosovo, Congo and Uganda.

She will be based full time in Seychelles, a group of 115 islands in the western Indian Ocean.

However, one member of the commission, Mauritian Pierre Rosario Domingue, will travel to Seychelles when the commission needs him. Domingue is the chief executive of the Law Reform Commission of Mauritius since 2006. He is an experienced lecturer on human rights and headed the Department of Law at the University of Mauritius.

Other members of the Commission who were sworn in as commissioners are Marie-Thérèse Purvis, Michael Green, Jacques Koui Gbilimou, Archbishop James Wong and Marie May Leon.

Archbishop James Wong and Marie May Leon were not present for the ceremony.

Truth and Reconciliation chair: ‘I hope we can help Seychellois people move forward’