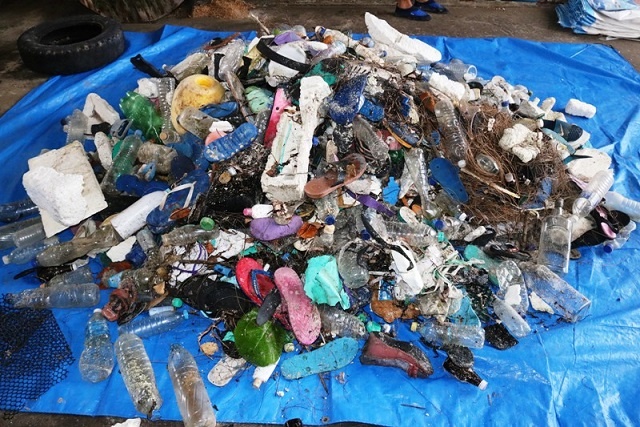 Trash collected on Coetivy which had the highest amount of waste -- 3,712 kg. (Seychelles Nation)

(Seychelles News Agency) - Environmental volunteers collected over 10 tonnes of waste that washed ashore on eight remote islands of Seychelles in the first-ever-large-scale clean-up of the Indian Ocean nation's outer isles, an effort that showed that large portions of the trash emanated from foreign countries.

Litter was collected over 10 days across the islands of Astove, Alphonse, Farquar, Desroches, Poivre, Remire, Coetivy, and Platte. The waste weighed a total of 10,627 kg.

The cleanup was organised by Islands Development Company (IDC) in collaboration with The Ocean Project Seychelles, a local non-profit organisation created to raise awareness on the dangers of plastic waste.

The chairperson of the IDC board of directors, Patrick Berlouis, who was leading the team of volunteers on Coetivy described as saddening that people in some parts of the world are using the ocean to dispose of their rubbish.

“We hope that this exercise is just a small step which will hopefully go a long way in educating people about the ocean and the need to protect it,” said Berlouis.

According to the Ocean Project Seychelles, litter was collected on both the beaches and the vegetation lying behind the shorelines.

The most common items of waste collected include plastic drink bottles, flip flops, along with ropes and fishing nets.

The Ocean Project Seychelles added that a significant portion of the litter emanated outside of Seychelles based on the original use of the items, brands/barcodes observed.

A count was conducted on Alphonse on the number of recurring brand names. The top four brands collected were Krating Daeng manufactured in Thailand, Coca Cola, YouC100 and Aqua-Danone made in Indonesia.

The highest amount of waste -- 3,712 kg-- was collected on Coetivy. The coral island located 290 kilometres from the main island of Mahe had since 2012 been used for a rehabilitation programme for convicted drug offenders. The facility was closed in January.

Farquhar atoll had the second most waste collected at 2,753 kg followed by Astove with 1,940 kg.

The cleanup initiative from March 18-31 which had the participation of 40 volunteers for a period of 10 days was aimed at raising awareness on the dangers of plastic waste.

The Ocean Project Seychelles will be using the data collected to establish where the plastic pollution hotspots are, how much is arriving annually and how this varies between the inner islands and outer islands.

A presentation of the data and an award ceremony for the volunteers will be held on Tuesday, May 14 at the Savoy Hotel, where government representatives and other organisations are expected to learn more about the next steps in fighting plastic pollution.

As far as possible, rubbish collected as part of the outer islands cleanup exercise will be recycled.

The outer island cleanup was launched while a similar five-week cleanup took place on the remote Aldabra atoll, a UNESCO World Heritage site, by 12 volunteers from Seychelles and England. Around 25 tonnes of waste, including some 50,000 flip flops, were collected and shipped back to the main island of Mahe.