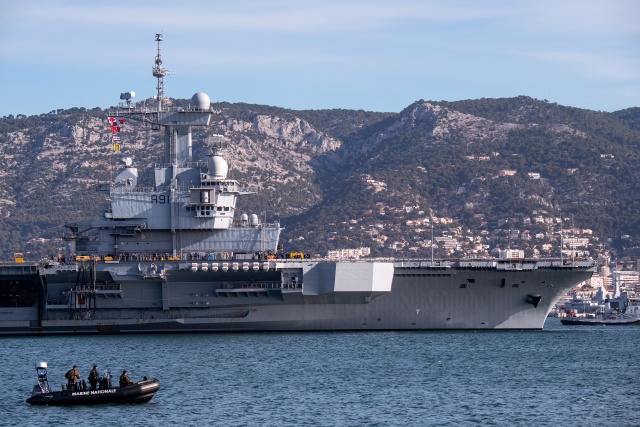 The French Navy's (Marine Nationale) flagship carrier Charles de Gaulle sails out of the port of Toulon for four a month mission in Indian Ocean, on March 5, 2019. (Christophe SIMON / AFP)

(AFP) - With the aircraft carrier Charles de Gaulle at the centre, France and India on Friday stepped up their biggest naval exercises as the Indian Ocean's strategic shipping lanes draw ever more envious eyes.

Without naming the Asian giant, India and France worry about China's growing economic clout and its territorial claims that have caused tensions in the South China Sea.

"We think we can bring more stability to a region that is strategic, that has huge stakes, notably for international trade," said Rear Admiral Olivier Lebas, who commands the French fleet that includes its only aircraft carrier.

The vast majority of trade between Asia and Europe and the Middle East -- particularly oil -- is carried across the ocean, while internet-communications cables straddle the seabed that is rich with its own oil and gas fields.

The 42,000 tonne Charles de Gaulle is one of 12 warships and submarines -- six from each country -- taking part in the 17th annual exercises off the coast of the Indian resort state of Goa.

French authorities say they are the biggest ever since the exercises started in 2001. And the presence of the aircraft carrier, which has just undergone an 18-month refit, is no accident.

Row after row of Rafale fighter jets were launched to deafening roars off the carrier's 261 metre (860 feet) runway.

India's traditional dominance in the Indian Ocean faces a growing Chinese shadow with the deployment of warships and submarines along shipping lanes and the construction of a giant network of commercial infrastructure through its Belt and Road initiative, which India strongly opposes.

"China is not an aggressive country" in the Indian Ocean, said Rear Admiral Didier Maleterre, the head of French maritime forces in the region.

"What you see in the sea around China, the reclamation of land on islands in the Spratleys or Paracels, you do not see that in the Indian Ocean," he said.

The top officer said President Xi Xinping's building of new Silk Road trade routes, which includes the Indian Ocean, "is a strategy being put in place that is mainly economic, with perhaps a dual purpose."

Malterre did not specify what other purpose, but added that there are "scenarios" in the next 10 to 15 years, "certainly not as big as in the sea off China, but that clearly could lead to tensions."

France annoyed China last month by sending a warship into the Taiwan Straits. The ship was intercepted by the Chinese navy and Beijing made an official protest, while France insisted it was exercising "freedom of navigation".

French diplomats insist there is no link between that incident and the Indian Ocean exercises.

The links between India and France "are certainly not a partnership aimed against any country in the region or any power in the world," said Alexandre Ziegler, French ambassador to India.

The Charles de Gaulle is being used again as a projection of French power however. In March, it took part in international operations in the Mediterranean against the Islamic State group. From these exercises, the carrier is to go on to Singapore.