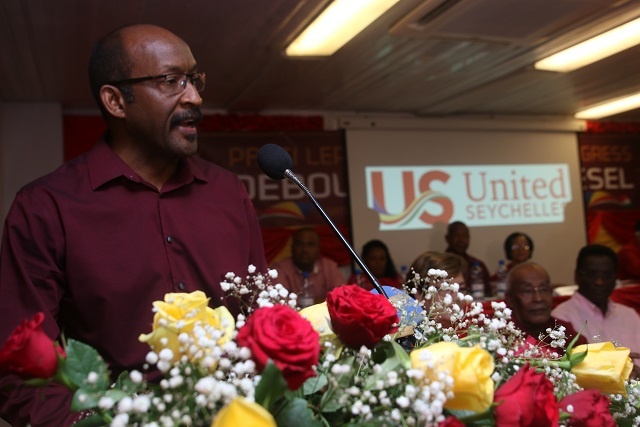 Vincent Meriton at the Congress in November 2018 when Parti Lepep changed its name to United Seychelles. (Joe Laurence)

(Seychelles News Agency) - As Seychelles gets ready for a presidential election next year, SNA will be seeking the views of the island nation's political leaders.

Our second interview in the series done via email is with Vincent Meriton, the Seychelles’ Vice President and the leader of the United Seychelles party.

SNA: It is almost two years since you were elected president of Parti Lepep/United Seychelles. What have you done to revitalise the party after losing in the parliamentary elections of 2016?

VM: Since the parliamentary elections of 2016, we have taken a few steps backwards in order to rebuild. This is something that is not new in our party but perhaps this time people have been paying more attention. Our party knows when to renew itself when to bring in new leadership, new ideas and adapt to new socio-economic realities and political circumstances.

The greatest and most significant change today is that we have a new Constitution for our party. I would invite everyone to read it. If people want to know what the SPUP (Seychelles People United Party), SPPF (Seychelles People’s Progressive Front) and Parti Lepep fought for and achieved in Seychelles, then read the preamble. If they want to know about the future and what United Seychelles represents in today’s political landscape, then read our values and guiding principles.

Every era produces its own unique challenges and opportunities. And for every era, you need the right leaders with the right message to respond to the aspirations and dreams of the people. We believe that a United Seychelles is our generation’s challenge and our party is determined to play its part in building this greater and more United Seychelles.

SNA: Many top officials have left the party. Have you been able to regroup and replace those members?

VM: A few members of the Central Committee (CC) have relinquished their posts and other members have joined. I know of one former CC member who has joined another political party.

SNA: There are new parties joining the political scene. Do you think this will divide the opposition or United Seychelles?

VM: I cannot predict what will happen. But I think it is normal in any democracy for people to exercise their rights to organise themselves in a political grouping or choose who to follow.

We treat all other political parties as adversaries and not as our enemies. We will continue to identify common areas where we can agree on for the greater national interest of Seychelles. At the end of the day, it is the people who will decide who they can trust with building a prosperous, stable and united Seychelles.

SNA: The party plans to elect its new Central Committee in July. Are you a candidate for the post of president of the party?

VM: The answer to this question will come at the right time.

SNA: Will the leader of the party be the next candidate for the presidential elections next year?

VM: This is a matter that will be decided at the relevant party’s congress. We will follow the democratic process that is required by the Constitution. But may I remind you that President Faure stood on our party’s ticket at the last election. There is nothing preventing him from requesting the endorsement of the party to be its next candidate at the next election. And there is also nothing preventing the party from nominating and endorsing him as our presidential candidate when the time comes.

I can understand why you ask this question and this is where again United Seychelles is transforming Seychelles' politics and leading the way. People need to know that politics is dynamic. And politics have changed in Seychelles, our democracy has matured. We now have stronger and far more independent institutions operating in a system of checks and balances. In this kind of environment, responsible political leadership is about finding the right balance to allow other actors to co-exist and work together for the common interest.

SNA: Do members of the party grasp the concept that the party can support a candidate that is not the president of the party?

VM: Our supporters and the people of Seychelles are more intelligent and mature than many want us to believe. They understand perfectly what is going on in Seychelles and what goes on in the world. President Faure was not the one who invented the concept of being a president who is not the leader of the political party he belongs to. Was Obama the leader of the Democratic Party? Is Donald Trump the leader of the Republican Party?

What has changed is that President Faure feels that in this era where you have for the first time in Seychelles’ politics, an opposition that is in control of the legislative, a responsible leader has to change and adapt. When your party is in control of both executive and legislative branches of the government, it is easier to be a leader of your party also. But this is no longer the case.

SNA: What are your views on the disagreement between the executive and legislative over the public service salary increase?

VM: I believe that our position on this issue has been clear and consistent all along. It is unfortunate that at a time when we are all talking about reducing the cost of living, we are disagreeing about how to do it.

It was never the intention of the government to start a battle with the opposition over this issue. It was a simple matter of voting in what was agreed in the budget. But this stalemate is normal in a democratic system where a party controls the executive and another the legislative. People have to understand and be prepared for this kind of politics. In some countries they call this gridlock while other people refer to this as the Achilles heel of democracy because it leads to paralysis in government and in the meantime just like we have seen here, we see politicians pitting one group against another when in fact we should be putting the national interest first.

Again, this is why President Faure’s move is so significant and why we have chosen United Seychelles as the name of our party. This is a new Seychelles with a new political landscape. We cannot afford to be fighting among ourselves. We need to move beyond the politics of the 80s and 90s. These times are gone. The leaders of that time are gone.

We don’t need that kind of politics anymore and those who want to play that kind of politics do not understand today’s political dynamic. Unfortunately, there are some political leaders who are set in a particular way and think they are living in 1977 and fighting Albert Rene. This era is gone. Seychellois are tired of this kind of divisive and bitter politics. They want to know what we are going to do for them not what we are going to do to punish those who have fallen short. They want politicians who can unite not divide this country. I firmly believe that United Seychelles is the best option for all Seychellois.

The Interview » Be a reporter: Write and send your article » Subscribe for news alert
Tags: United Seychelles, Parti Lepep