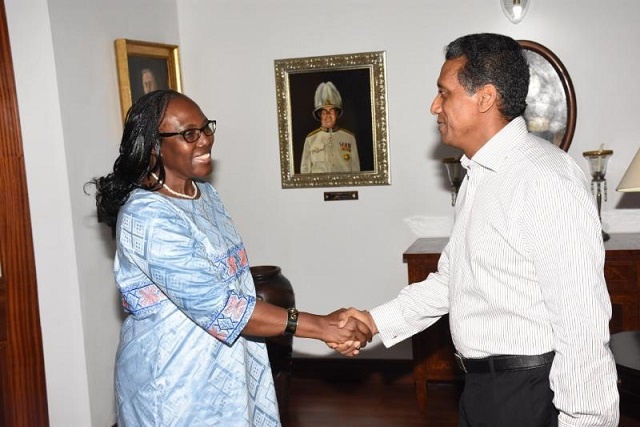 (Seychelles News Agency) - Efforts to help fellow Africans in need carried out by the Red Cross Society of Seychelles were saluted by a high official of the International Federation of Red Cross on Tuesday.

The director of the International Federation of the Red Cross and Red Crescent for the African Region, Fatoumata Traore, spoke highly of Seychelles' Red Cross chapter during a courtesy call to President Danny Faure at State House, Victoria.

Traore hailed the Red Cross Society of Seychelles for its achievements, especially through its help offered to foreign countries in times of difficulties.

“I have seen that in solidarity with Mozambique, the national society has been trying to raise resources to show their support to fellow Africans and fellow humans that have been suffering from cyclones Idai and Kenneth,” said Traore.

Earlier this month, the island nation’s Red Cross society started collecting monetary donations for Mozambique. Over 500,000 people were left without homes after the country was hit by two deadly cyclones only weeks apart.

“To date, over $2,277 (SCR31,000] has been raised, expected to be transferred by the end of the week,” said Collette Servina, the secretary general of Red Cross Society of Seychelles.

Traore added that “with climate change, we have to invest more in our Red Cross societies because we will be having those types of crises and disasters more and more with high magnitude, so we have to be organised and ready.”

“Crises, disasters, and conflicts are everywhere so building social inclusion is critical for us and ensuring that we are having a resilient community everywhere, including in Seychelles, is also critical,” Traore said.

Traore is visiting Seychelles, a group of 115 islands in the western Indian Ocean, to support the local branch of the society as part of the celebration for the 100th anniversary of the International Red Cross.

She said that the Seychelles Red Cross is “doing a great job” on resilience building.

“The entire work of the national society has been around saving lives and reducing suffering. This is being done by training people for first aid, dealing with community resilience building to ensure that when there is a shock, people can easily come out of it and be even stronger because of the experience they have and not waiting for anyone else to come and help them,” said Traore.

On May 11, the Red Cross Society of Seychelles (RCSS) re-elected Kisnan Tamatave as the president during the eleventh general assembly of the society. Six other members were elected on the committee in the assembly which Traore attended.

Serving a three-year mandate, the newly elected national committee will work on drafting and implementing policies for the running of the society.

Traore commented that “we are happy to see that here we have a professional team and that they are well committed, working day and night, being everywhere for people. We are lucky to have such a great national society with great leadership in Seychelles.”

General » Be a reporter: Write and send your article » Subscribe for news alert
Tags: International Federation of the Red Cross and Red Crescent, Red Cross Society of Seychelles

Survey in Seychelles finds some houses with no running water, electricity