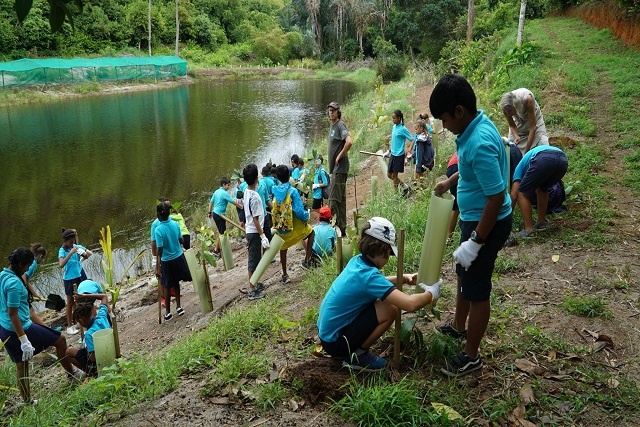 Children are the guardians of planet earth and by engaging them now will ensure future protection and conservation efforts. (EBA project, Facebook) Photo License: All Rights Reserved

Seychellois school children are being given the capacity to participate in climate change resilience initiatives by managing native tree nurseries.

The two nurseries – to be constructed at two primary schools in the north of the main island of Mahe – will propagate trees which will be planted in wetlands, beach backs and catchments.

“This is a part of a programme to support communities to get involved in the management of water resources and the local environment,” said James Millett, scientific and technical advisor of the Ecosystems-based adaptation project.

Millett added that “the project is helping to build capacity to grow native trees to be planted locally by community and youth groups. This provides the opportunity for kids to learn about growing trees from seeds or cuttings through the process of growing on, planting out and care of planted trees.”

The construction of the nurseries at Glacis and La Retraite primary schools is part of the Adaptation Fund project Ecosystem-based adaptation to climate change in Seychelles (EBA project). The project seeks to reduce the vulnerability of the Seychelles – 115 islands in the western Indian Ocean - to climate change, focusing on two key issues: water scarcity and flooding.

The project is being implemented in five catchments, four on Mahe, the main island and one on Praslin - the second most populated island. Activities include the restoration of forests, wetlands and rivers using soft engineering solutions and the removal or reduction of invasive non-native plants.

The schools have been chosen due to their close proximity to one of the project sites at the sub-district of North East Point which is vulnerable to flooding and sea level rise.

A third nursery - in the southern district of Baie Lazare - will also be constructed on a farm and will support the Watershed Committee of this community to grow native trees to plant.

According to Millett, it is not known yet what types of trees will be grown at the nurseries. “It depends on the precise need of the areas to be planted because different species do well under different conditions.”

“But we will include trees such as ‘bwatab, takamaka, bonnekare bordmer’ which are fast growing species suitable for coastal areas, and in freshwater wetland areas.” Millett added that palms such as ‘latannyen lat’ and some ‘vakwa’ will also be produced.

The two school nurseries will also include a rainwater harvesting system, fitted to 1000 litre tanks to collect rain from rooftops.

“I think it is important to include and get children interested in conservation projects,” said Wilna Figaro – a primary school teacher involved with eco-schools and wildlife clubs.

Figaro explained that “after all the children are the guardians of planet earth and by engaging them now will ensure future protection and conservation efforts.”

Millett concluded by saying: “Ecosystem-based adaptation is about helping people manage their environment to adapt to climate change, hence, the importance of working with schools and community groups.”