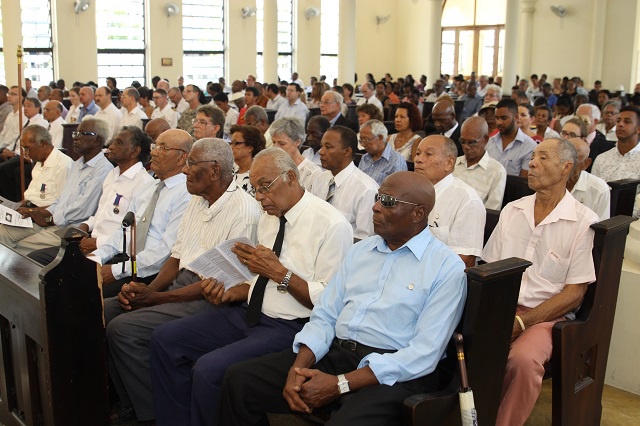 The religious service was held at the Anglican Cathedral of St Paul in Victoria (Joe Laurence, Seychelles News Agency)

Seychelles, a tiny Indian Ocean archipelago of 115 islands, a British colony at the time also ended up sending troops to the great battle, and it’s only fitting then that the island nation has joined with other partaking nations worldwide to commemorate the centenary of the World War I.

A religious service was held yesterday at the Anglican Cathedral of St Paul, in the Seychelles Capital of Victoria yesterday morning.

The service organized by the British High Commission in Victoria and attended by the archipelago’s Vice President Danny Faure, government ministers, members of the resident diplomatic corps, representatives of other religious faiths and a large congregation of devotees.

The British High Commissioner, Lindsay Skoll quoted Winston Churchill from his speech “A Time of Triumph” which portrayed his praises for those who fought in the First World War including the Seychellois soldiers who fought alongside the British and other fighters from Commonwealth member states.

She stated that one of the most enduring lessons of that terrible conflict is that in the gravest and grimmest situation people of all background, races and religions unite against darkness and oppression in the name of a common cause.

She also commended the courage of the Seychelles and the Seychellois to enlist as soldiers when they were called and did not hesitate to respond.

“The losses endured by Seychelles during the First World War were staggering. The census of 1911 recorded a national population of just 22,600. Of this tiny community – less than a quarter of the current population of Seychelles – the lives of 347 young men were taken by the conflict. The impact of such a staggering level of loss in such a small community is impossible to imagine. But there is perhaps no greater testimony than to the spirit and character of the people of Seychelles than the fact that , a little over twenty years after suffering this terrible trauma , they did not hesitate to take up arms again in defence of the Commonwealth at the outbreak of the Second World War” said Skoll.

While all of the Seychellois men who volunteered to fight during the First World War have passed away a few remaining Seychellois war veterans enrolled in the British armed forces during the Second World War also attended the memorial service yesterday.

One of them Major Andre Baronne retraced how life was difficult in Seychelles during the war. He spoke of the constant threats of the Germans which saw the setting up of local armed units under the direction of a Defence Council and also a national call to grow more local food for its sustainability.

The trigger of First World War

Most European historians traditionally blamed the start of the war on the assassination of Archduke Franz Ferdinand, heir to Austria-Hungary's throne, and his wife, Sophie, by a Serbian nationalist Gavrilo Princip on June 28 1914 in Sarajevo.

What unfolded then is often described as “a complex web of European alliances” which eventually led to World War I on August 4 1914 when Britain declared war on Germany.

Austria-Hungary declared war on Serbia on July 28, bombing the Serbian capital the following next day.

However while the Archduke's assassination contributed to the build up to the world war, many European powers were already anticipating it.

In a recent revelation in the British press, a document has been uncovered which speaks of a conversation between King George V and his British Foreign Secretary, Sir Edward Grey, two days before the war was declared, which was recounted by Grey’s nephew Sir Cecil Graves.

In the document it is said the King informed Sir Edward it was "absolutely essential" Britain go to war in order to prevent Germany from achieving “complete domination of this country”.

The accounts says that Sir Edward told the King that the Cabinet had yet to find a justifiable reason to enter the into war, the King is said to have replied: “You have got to find a reason, Grey.”

Historians around the world still continue the debate as to who was to blame for the First World War and whether it was inevitable.