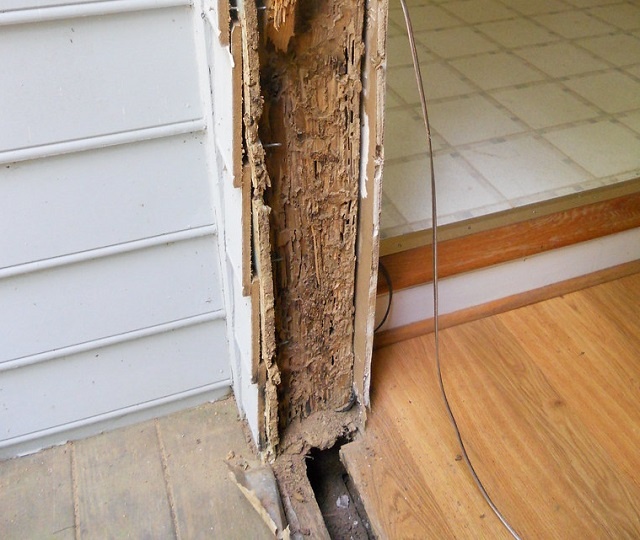 An example of the damage termites does to wood used in construction. (Chris Baranski, Flickr) Photo License: CC BY 2.0

In a bid to control a termite infestation, authorities in Seychelles are intensifying measures at wood vendors and increasing surveillance at different ports.

The steps are being taken following complaints of infestation brought forth on social media by members of the public after they had bought wood that was infested with termites.

Speaking to SNA on Tuesday, the chief executive of the Fair Trading Commission, Francis Lebon, said that after seeing the complaints the commission has mobilised different stakeholders involved to help deal with this issue.

“Our aim and mandate are to protect consumers and to ensure that they receive a better deal. So we are working with wood importers, vendors and those that are being bought to ensure that there is enough education on this situation,” said Lebon.

Lebon said, "Since we don’t have the mandate to deal with the situation directly, we found it important to communicate and mobilise other parties involved to find a solution for this problem.”

Known as a silent destroyer, termites are a small and menacing insect that can chew through wood, wallpaper, and flooring undetected.

Lebon said that as far as he is aware the problem is arising from wood that is being imported in the country.

The chief plant biodiversity officer of the National Biosecurity Agency, Keven Nancy, said that the common practice is that importers need to get a port permit with the agency before importing the wood.

“For importers, they need to ensure that the company they are sourcing from treats the wood against pest infestation. Then a proof certificate needs to be issued by the company which has treated the wood. The treatment is not long-term, but it is done on a quarantine basis to allow the wood to be transported from the country of origin to Seychelles pest-free,” said Nancy.

The issue then comes to, where and how long it is being stored at the company which has imported the wood before selling it. “The wood requires further treatment before using in construction. This is where the education needs to come in for importers, sellers and consumers,” said Nancy.

The agency was set up under the Animal and Plant Biosecurity Act, 2014.  It is the agency responsible for biosecurity protection in Seychelles – 115 islands in the western Indian Ocean - with the mandate to prevent the introduction and spread of animal and plant pest and disease including Invasive Alien Species.

A local contractor, Brian Changty Seng, who has been affected with the issue of termites, said that he had purchased wood from a local company which had a proof certificate of treatment, but not more than a year later he saw that the wood was infested by termites.

He said that he has brought his concern to the local authorities to be told that the onus is on the contractor to treat the wood, adding that: “Seychelles has signed a convention that does not allow this treatment to be done locally.”

The contractor said that treatment of wood should last more than 30 years and there is no such thing as only a quarantine stage if the wood has followed proper treatment like radiation.

For further control of termites, the Seychelles Planning Authority has also stepped in with a new measure.

“It will now become mandatory for all owners to treat the foundation and wood being used during construction. This should be done by a licensed private pest control company. Then the company needs to provide a receipt that this has been done before approval is given for further construction,” said Joseph Francois, the chief executive of the Planning Authority.